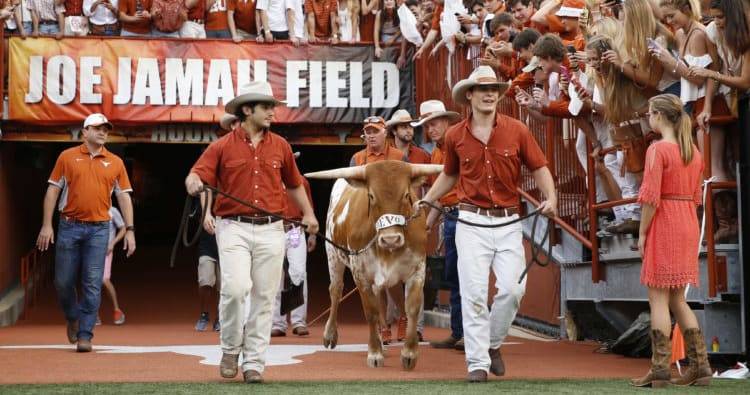 The day has finally arrived.

After a long offseason, Texas is set to take the field for the first time under Tom Herman as the No. 23-ranked Longhorns host Maryland at Royal-Memorial Stadium on Saturday. Eyes will be glued to see how much, if any, Texas has improved since Charlie Strong’s firing.

RELATED: Tom Herman is transforming Texas with his vision, messaging and plan

Here is everything you need to know to follow Texas vs. Maryland.

Weather: Partly sunny and 87 degrees at kickoff. No rain. No wind. High of 92.

What TV channel is Texas-Maryland on?

It will be televised nationally on Fox Sports 1.

How can I watch Texas-Maryland online?

It will be streamed live on FoxSportsGo.com.

How can I listen to Texas-Maryland on the radio?

You can listen live on the Longhorn IMG Radio Network, which can be found on Sirius channel 132 and XM 199. Craig Way will have the call on 104.9 The Horn FM in Austin. A full list of radio affiliates can be found here. To listen online, click play below.

Who is calling the game for Fox Sports 1?

Texas vs. Maryland keys to the game

Longhorns quarterback Shane Buechele had the most productive season ever by a true freshman quarterback at Texas, throwing for 2,958 yards while starting every game. He faded down the stretch, however, throwing 5 interceptions to only 2 touchdowns as Texas ended the season on a three-game skid. Herman quarterbacks have a track record of dramatically improving in their first season working with him. Will Buechele follow the pattern set by the likes of Braxton Miller and Greg Ward Jr.?

Texas ranked 94th in the nation in total defense last season, surrendering 448.3 yards per game. The early-season games were especially bad. Texas returns most of the same players from that unit, but new defensive coordinator Todd Orlando is bringing his 3-4 system and aggressive mentality that worked so well at Houston.

Texas should overwhelm Maryland quarterback Tyrrell Pigrome, but how well will the Longhorns deal with the Terrapins’ rushing attack? The talent is there. It comes down to execution and effort.

The coaching staff isn’t the only thing that’s new in Austin. Fans will see changes around the stadium, from a new beer sponsor (“Horns Up, Limes In”) to new barbecue. Still, there were reportedly still 10,000 seats left for the game as of Monday. Texas fans have been hurting. How quickly will they get behind this team?

Texas to host handful of commits, targets against Maryland

The Eyes of Texas: Three Terrapins the Horns will be watching