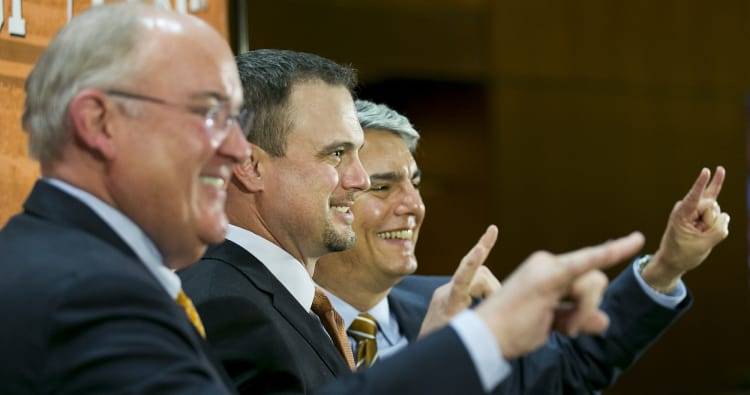 University of Texas academic and athletic officials responded in different ways this week to help those affected by Hurricane Harvey.

UT President Gregory L. Fenves said that roughly one-third of the school’s undergraduate population comes from counties that were declared natural disaster areas. That includes Harris County, where Houston is located, and counties along the Gulf Coast down into South Texas.

“One of the things I was thinking about as the week developed is the financial aid needs of students that have been affected by the hurricane,” Fenves said.

Fenves said the school contract with Nike features a item dubbed “presidential incentives.” The shoe and apparel maker agreed to earmark $400,000 to help with financial aid for UT students affected by Harvey. Fenves rounded up another $100,000 through donations to the university.

Then, the school was planning an in-game promotion in hopes that fans would donate another $500,000 to reach a $1 million total.

“If each person contributes $10, we’ll reach the goal by the first half,” Fenves said.

Any UT student that needs financial assistance as a result of Hurricane Harvey should visit the financial aid office, Fenves said.

The Texas athletic department helped out all week long. UT officials hosted the University of Houston football team early in the week and dispatched the program’s 18-wheeler to ship supplies to flood-ravaged areas.

Baylor and Texas A&M announced earlier in the week they were giving away thousands of tickets to Harvey evacuees. As for game tickets against Maryland, UT officials wanted to do something more impactful than just give away a large block of tickets for the sake of large numbers, three sources said.

School officials met with the Red Cross late in the week and learned there were approximately 750 Harvey evacuees in the Austin area. It was determined that about 500 would be interested in coming to the game, so that’s the number UT settled on, school officials said. The school organized transportation and provided food vouchers.

Texas men’s Athletic Director Mike Perrin said the school was “very strategic in reaching out” to the Red Cross. “That doesn’t rule out doing something else another time, but we didn’t walk around just distributing tickets,” Perrin said. “We worked with the shelter here.”

UT made the announcement at 7:40 p.m. Friday. Earlier in the day, the school announced that 9,500 tickets were still available for the Maryland game.

Against San Jose State, the Longhorns will honor first responders. Details will be announced mid-week, a school official said.

“I think the university has responded appropriately and will continue responding,” said Perrin, a longtime Houston resident. “My son and his wife and two of my granddaughters were there until Thursday. It was tough to watch. Whether you’ve got family there or not, it’s just a horrible situation.”

Social reaction: Texas fans are all-in for the start of the Tom Herman era