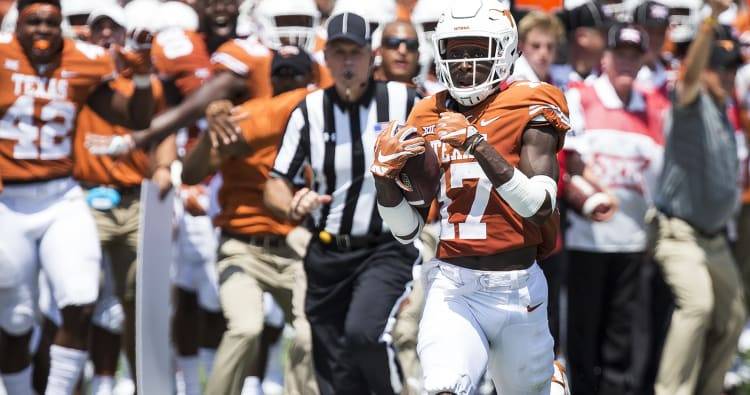 A dozen Longhorns made their college debuts on Saturday. Reggie Hemphill-Mapps’ impression may last the longest.

Hemphill-Mapps, who was a three-star recruit out of Manvel in 2016, was ready to get on the field. It’s been awhile.

“It’s was just exciting because it’s been, like, two years since I played competitive football,” Hemphill-Mapps said.

There were some road bumps. He temporarily left the game with an undisclosed injury in the first half. He also picked up an offensive pass interference penalty that negated Jerrod Heard’s first-down catch at the Maryland 5. Two plays later, the Terrapins blocked a field goal attempt and returned the loose ball for a 21-7 lead.

Still, he caught a lot of passes. Nearly five months ago, his five catches trailed only Collin Johnson in the Orange-White game.

“Again, that’s something positive,” said Johnson, who had seven catches for 125 yards and a touchdown. “Like I said about Reggie awhile back, I said Reggie can just roll out of bed and play football. he’s just an athlete, and that’s just a great weapon to have on this team.”

Not getting any run: In his final game at Texas, D’Onta Foreman rushed for 165 yards against TCU. It was his 13th straight 100-yard game. In the one game he missed last year, Chris Warren III picked up 95 yards.

On Saturday, Texas got a team-high 31 yards from Warren. Sophomore Kyle Porter picked up 21 yards. The two running backs, however, combined for only 14 rushing attempts; Shane Buechele threw the ball 52 times. (And Buechele actually led UT with his 15 rushes).

Texas coach Tom Herman said there was a bit of a “give-and-take” on offense: “It’s not like we attempted a lot of runs. I think we saw the way that they were supporting the run and figured we could throw the ball on them, which we did.”

Don’t litter: Following a no-call on a fourth-down pass attempt in the fourth quarter, a few patrons littered the field with debris. The unruly fans were warned and chided by the stadium’s public address announcer. Afterward, both Johnson and linebacker Naashon Hughes shrugged off the fans’ actions.

“That doesn’t bother me at all,” Johnson said. “The only thing I care about is my brothers in the locker room, because those fans don’t sweat and they don’t grind with me. My teammates in the locker room do … I don’t even notice that.”

Third and Longhorns: Inside Maryland 51, Texas 41