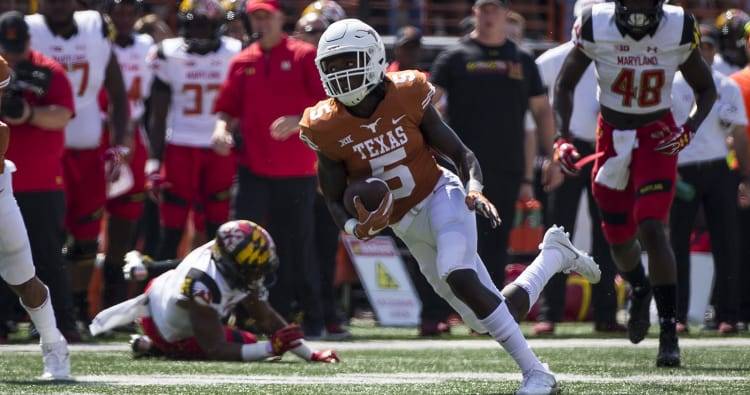 The stats will say differently, but Holton Hill insisted that Saturday was not a good day.

In Texas’ 51-41 loss to Maryland, Hill returned both an interception and a blocked field goal for touchdowns. The junior cornerback also ranked second among all Longhorns with his eight tackles, one of which was a stop that set up Reggie Hemphill-Mapps’ score on a 91-yard punt return.

“It’s never a good day when you lose,” Hill said. “We’ve just got to go back to the drawing board and take it one practice at a time, and hopefully we’ll go undefeated for the rest of the season.”

Hill helped Texas strike first in Saturday’s 92-point shootout, nabbing a tipped pass and taking it back 31 yards. Hill, whose interception return two years ago against Oklahoma State had been UT’s last such score, wasn’t done.

A quarter later, defensive lineman Poona Ford blocked a 31-yard attempt by Adam Greene. The football once again found its way into the hands of Hill, who coasted 65 yards for the touchdown.

“I saw green ahead of me, and I just went,” Hill said. “I’m going to give a shout-out to Poona Ford. Luckily Poona got the block and it was right in front of me. I took it right to the house.”

Despite Hill’s performance, there was still plenty to nitpick in the secondary. Maryland quarterbacks Tyrrell Pigrome and Kasim Hill completed 12 of their 15 pass attempts. (Hill’s interception of Pigrome first bounced off the hands of a Maryland receiver). Working at times against Hill, receiver D.J. Moore turned seven catches into 133 yards.

Texas even rode a rollercoaster on special teams, getting points off Hill and Hemphill-Mapps returns but allowing Maryland to score off a blocked field goal of its own. Additionally, Texas missed a 42-yard field goal and botched two kickoff returns.

If Hill’s game is to be considered a breakout game, it comes after a season after he played in only five games. (Hill started eight times as a freshman). He admitted disappointment over his role last year, but “I just put it in God’s hands, and I’m back out there now.”

A Houston native, Hill also drew inspiration after the hit that Hurricane Harvey took on his hometown.  Describing himself as “blessed,” Hill said his home was spared last week. His family was also able to attend the game on Saturday.

“I wasn’t able to be down there with my family and stuff, so I had a chip on my shoulder from that,” Hill said.

The post With Hurricane Harvey and benching behind him, Holton Hill scores twice for Texas appeared first on HookEm.