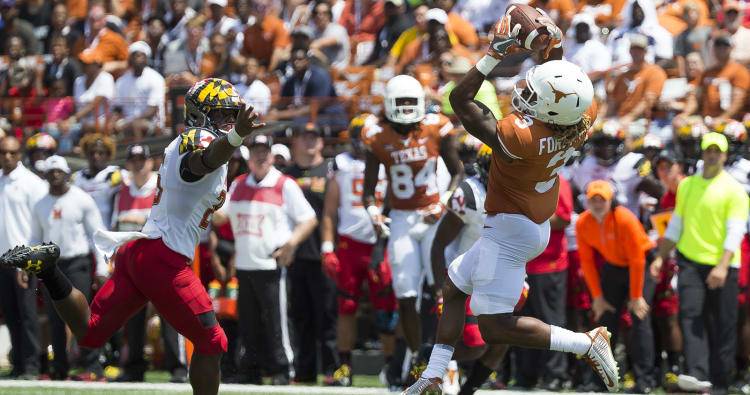 There were 142 snaps taken in Texas’ 51-41 loss to Maryland on Saturday. Here are five that ended up making a big difference:

Remember when UT failed to score a non-offensive touchdown in 2016? The Longhorns quickly made sure that history wouldn’t repeat itself, scoring on returns of an interception, punt and blocked field goal in its season opener. The first-such score — junior Holton Hill’s 31-yard interception return — came on the game’s third offensive snap, and it boosted UT to an early 7-0 lead. On the play, Hill found himself in the right position to nab a Tyrrell Pigrome pass that had deflected off a Maryland receiver’s hands. Hill has now scored on both of his career interceptions.

UT’s John Burt had a touchdown catch wiped out by a teammate’s holding penalty, and Maryland defensive back Darnell Savage, Jr.’s score off an interception was negated by an offsides call. The game’s biggest flag, though, was thrown in the second quarter. Trailing 14-7, Jerrod Heard caught a short seven-yard pass that gave UT a first down at the Maryland 5. Freshman Reggie Hemphill-Mapps was penalized for offensive pass interference, however. Two plays later, Maryland blocked a 44-yard field goal and returned the deflected ball for a touchdown.

Senior Armanti Foreman led UT in receptions (34) and receiving yards (420) during a 2016 season that was mostly overshadowed by the play of his twin brother, D’Onta. Foreman found himself buried on UT’s depth chart at the beginning of last week, but he gave the offense a needed spark on Saturday. Three plays after Burt’s touchdown was called back in the third quarter, Foreman hauled in UT’s first offensive score. Foreman, who complemented that 33-yard trip into the end zone with four additional catches, also provided the Texas offense with its first touchdown in 2016.

Maryland led 30-14 at halftime, but its lead was trimmed to 37-34 by the fourth quarter. To make things worse for the Terrapins, Pigrome’s afternoon — which featured 239 yards of offense and three total touchdowns — had been cut short by a third-quarter injury. Maryland inserted true freshman Kasim Hill into the game, and near the final quarter’s midway point, his offense faced a 3rd-and-19 at the Texas 47. With momentum fleeing, Hill found junior D.J. Moore for a 40-yard gain. Maryland scored two plays later on Hill’s first career touchdown run, and that all but sealed the deal.

Texas trailed 44-34 with 3:39 left when Shane Buechele was unable to connect with Lil’Jordan Humphrey on a fourth-down attempt. Fans wanted a defensive penalty called on the play and debris was thus thrown on the field. The litter, though, overshadowed a bigger problem for Texas, which was 0-for-4 on fourth down. On back-to-back drives between the second and third quarters, Texas missed on 4th-and-2 and 4th-and-goal from Maryland’s 36 and 5. A sack of Buechele on a 4th-and-2 near midfield also set up the aforementioned drive in which Maryland converted its 3rd-and-19.

With Hurricane Harvey and benching behind him, Holton Hill scores twice for Texas

Was Maryland a one-game hiccup or a true reflection of what the Longhorns really are?