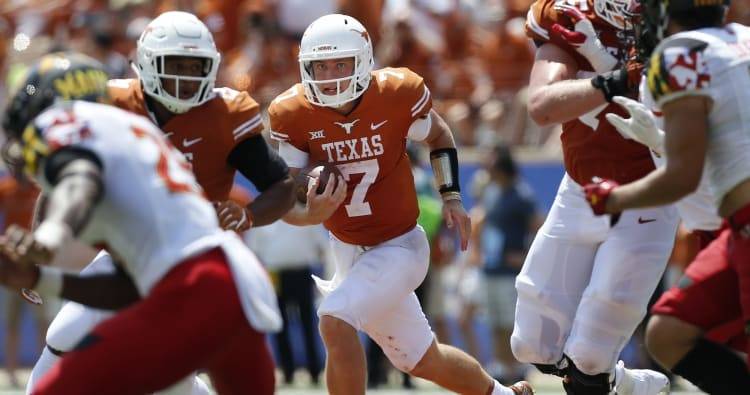 A quarterback injury in the season opener ruined Charlie Strong’s maiden voyage at Texas in 2014. Now the same fate may befall Tom Herman.

Managing the laundry list of problems from the season-opening loss to Maryland is challenging enough. But on Monday, Herman announced that quarterback Shane Buechele had a bruised throwing shoulder and will not practice Tuesday. He has not been ruled out against San Jose State (1-1) on Saturday.

“If he can play not to the detriment to his team, then he’s going to do that,” Herman said.

It was imperative that Texas (0-1) keep Buechele healthy this season because there is no real depth, same as it was three years ago. David Ash suffered a concussion in the opener against North Texas, experienced dizziness hours later that night and had to retire. An inexperienced Tyrone Swoopes led the Longhorns to a 6-7 finish.

Now, freshman Sam Ehlinger is the only quarterback behind Buechele. Quarterback-turned-receiver Jerrod Heard, once considered the “nuclear option,” will be pulled back over to quarterback this week and split practice time leading the second-team offense and at receiver, Herman said.

“It certainly doesn’t help the depth chart,” he said of Buechele’s injury.

The sophomore told coaches he couldn’t remember what play he was injured on. Herman said the coaches found a play on the game film where Buechele rolled out of the pocket and was brought down hard. But Buechele, like Ash, finished the game. It wasn’t until the next morning that he woke up in pain, Herman said.

“The doctors have said that rest is the best option right now and to keep evaluating it every 24 hours or so,” Herman said.

As for Ehlinger, Herman said, “Is Sam ready? No, not right now. But he will be. He’s close. He’s as close as any true freshman I’ve ever been around. So I think him getting these reps this week, he’ll respond. He’ll be ready.”

Ehlinger did not play against Maryland, and Herman said after the game there were no sideline discussions about putting him in. Maryland freshman Kasim Hill entered the game against the Longhorns in the fourth quarter and polished off the Terps’ 51-41 win.

As important as the quarterback situation may be, Herman has plenty of other things to worry about. The run defense topped the coach’s list; the Horns allowed 263 rushing yards as players were out of position at times and missed tackles. “All of the above,” Herman said.

Herman said the defensive coaches saw moments on film where players didn’t properly execute against what was coming. For example, linebacker Malik Jefferson said after the game he thought the Terps were going to run on third-and-19. Hill completed a 40-yard pass instead.

Herman said “there were a lot of ah-ha moments” with the players during Sunday’s film session when they could see mistakes on film and make corrections.

“There was a lot of trying too hard. I think that’s real,” Herman said. “When you’re trying to be perfect in this game, you wind up being a step late to everywhere you’re going because you’re evaluating, you’re tip-toeing, you’re figuring things out. You want to be so right? Is this the right way or is this the right way?

“We’ve got to be a lot more reckless,” he added. “I think that genuinely comes when you trust what and how you’ve been coached so that there is not more thinking. This is the way to do it. There is no other way to do it.”

There were no changes on the depth chart given to reporters.

About the only time Herman stiffened came when he was asked whether the offensive line was manhandled. This was the same unit he previously compared to the 2014 national championship group at Ohio State. “Manhandle wouldn’t be the adjective that I’d use,” he said.

Herman did address why no coordinators were made available after the game. The coach said he’s ultimately responsible and, for the time being, the team should have one voice.

He also acknowledged that fans expressed anger by throwing debris on the field. It should be noted that was mostly triggered by an official’s no-call.

Still, Herman knows that Texas fans are disappointed. He was, too. But the Longhorns have another game this Saturday and 10 more after that, including a trip to USC followed by a dangerous Thursday night conference opener at Iowa State.

This season is only getting started.

“As I said post-game, this is a process,” Herman said. “We’re in this thing for the long haul. These nine months of training wasn’t just to beat Maryland. This was to instill and solidify a culture, a way of doing things and an attitudinal shift that I feel like we’re on our way.

“Did I think we were ahead of where we showed on Saturday? Yeah, I did. And hopefully we’ll show that this week.”