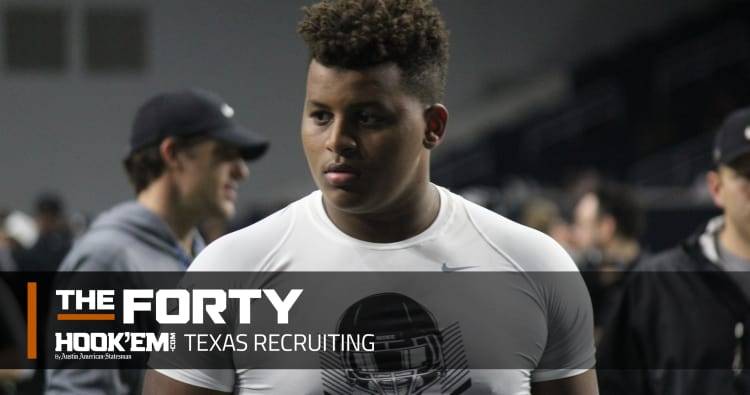 August began with a recruiting victory for the Longhorns when JUCO tight end Dominick Wood-Anderson committed to Texas over Oregon and Alabama. It was the start to a blistering month of recruiting success. Wood-Anderson was one of four commitments Texas earned during the month of August.

September didn’t start too well for the Longhorns.

The final piece of good news in August was when Frisco Wakeland offensive lineman Rafiti Ghirmai pledged. The four-star prospect says he’s checking in at 6-5 and 315 pounds to start his senior year. He played right tackle for Wakeland in a season-opening victory against Frisco Liberty.

“Our running back ran for more than 300 yards, so I’d give the offensive line an A+ for our performance tonight,” Ghirmai said after the game.

Ghirmai, who committed on Aug. 21, was the last bit of good news for the Longhorns, though. Texas began the season with a 51-41 home loss to Maryland.

Early returns suggest the loss shouldn’t derail the recruiting momentum built by Tom Herman and his staff for 2018; Texas’ class still is ranked No. 2 in the nation.

“Texas is the type of place where one class can come in and help turn it around,” Ghirmai said. “I want to be part of something special and joining a class like the one Texas is building was definitely a factor for me in choosing Texas.”

Ghirmai isn’t a sure-fire tackle in college. The No. 33-ranked prospect on the Fabulous 55 might end up at guard since his 6-5 frame places him right on the cusp of enough height to excel on the edge.

His goal is to reach the NFL and that might be best attained by at least learning to play on the interior of an offensive line.

“Texas told me I’ll be primarily tackle but I’ll learn the guard position to help provide depth and versatility,” Ghirmai said. “My feet got a lot better in the past year. As a junior, I couldn’t do a lot of zone or gap schemes. We did a lot of work on my feet this offseason and I’m starting to see the results.”

Ghirmai attributes some of that improvement to elite camps like The Opening regional and the Under Armour All-American Series.

“It is helpful to get taught by NFL veterans,” he said. “They know what perfection is for an offensive lineman, so I think those camps help a lot come football season.”

UCLA still in the picture

The Bruins were the biggest threat to Texas for Ghirmai’s commitment. It sounds like UCLA is still in the picture even following his pledge to the Longhorns.

“Family is a big factor,” he said. “I have a lot of family and Los Angeles, plus it is Los Angeles with the beaches and stuff.”

Don’t be shocked to see Ghirmai take at least one of his official visits to UCLA.

“My recruitment isn’t completely shut down. I’m a hard commitment to Texas but I’m not going to shut it completely down,” he said. “I might take one of my official visits to UCLA.”

What’s next for the Longhorns after first-week loss to Maryland?