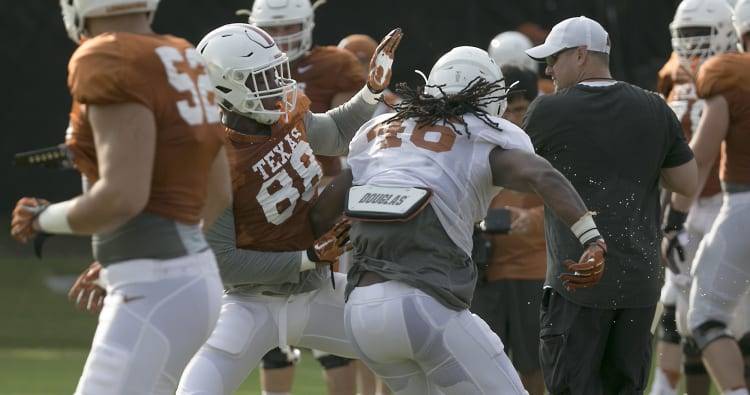 This weekend, Texas fans will likely get a chance to meet Kendall Moore.

Longhorns coach Tom Herman said Monday that they’ll find a way to utilize Moore — a graduate transfer tight end from Syracuse — Saturday against San Jose State. Moore did not play in Texas’ 51-41 loss to Maryland. He wasn’t listed on the depth chart, either.

Garrett Gray, a converted receiver, instead got the start at tight end. He recorded the first four catches of his career though he was unable to connect with Shane Buechele on a key fourth-down attempt in the first half. Freshman Cade Brewer also showed up on the participation report.

Herman said Gray played “no better or worse than most on offense.” He did say that there had been a discussion about getting Moore on the field; Herman said Monday that the 6-6, 250-pound tight end could be an asset in the running game.

“Probably the best run-blocker of the three guys right now,” Herman said. “Run behind him maybe a little bit in this game and get him involved in the run game. I would imagine you’ll see him a lot more this week.”

The tight end position is still in flux at Texas. UT has been scrambling for a starter since senior Andrew Beck sustained a season-ending foot injury last month. Freshman Reese Leitao, a three-star signee from Oklahoma, is still serving a two-game suspension after he pleaded guilty to a misdemeanor drug possession charge.

Not special teams: Joshua Rowland missed a field goal in his Texas debut and had a 44-yard attempt blocked and returned for a touchdown. The Longhorns also gave up the football on a botched kickoff return. Another slip-up in the return game forced Texas, trailing by 10 points with 7:34 left in the game, to start a drive at its own 21.

Herman said Rowland clipped the turf with his kicking leg on a 42-yard attempt that sailed left. Rowland, who signed with Texas out of Mississippi Gulf Coast Community College, shared in the blame on the blocked kick.

“Really the only place to block a field goal is up the middle, so we’ve got to do a much better job solidifying that,” Herman said. “Our kicker needs to do a better job of getting the ball up, too. It was a bit of a low kick.”

It wasn’t all bad on special teams. Michael Dickson got off a 64-yard punt, Texas scored on a blocked field goal of its own, and Reggie Hemphill-Mapps’ 91-yard punt return was the third-longest in school history. Herman also applauded newcomers Marqez Bimage and Gary Johnson for their efforts on kickoff coverage.

No changes: The loss to Maryland did not appear to cost any players their starting spots; the depth chart handed on Monday was the same depth chart issued before UT played the Terrapins.