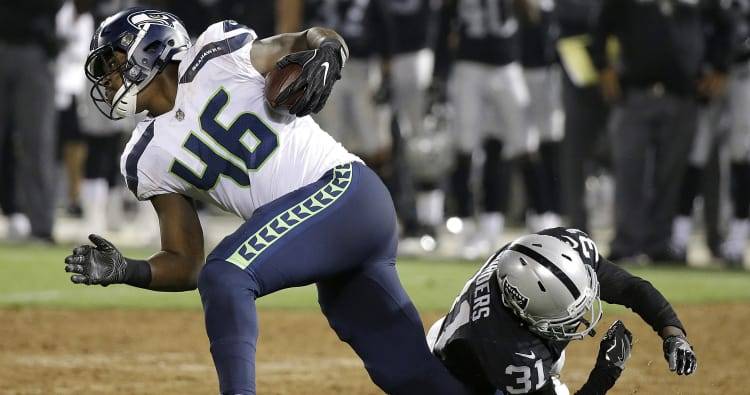 Tyrone Swoopes’ NFL dream is still alive, with a catch.

Well seven catches actually, because that’s how many receptions Swoopes had for the Seattle Seahawks during their preseason. While he didn’t make the team’s 53-man roster, released Monday, things still look promising for the former Texas quarterback turned NFL tight end.

The Seahawks signed Swoopes to their 10-man practice squad, a move that likely keeps him off the field for the time being but shows that team sees value in keeping him around. Swoopes went undrafted in April, but wowed Seattle coaches and teammates during training camp.

He finished the preseason with seven grabs for 69 yards, the longest one being this 21-yard catch and run against the Los Angeles Chargers.

Swoopes had four catches for 31 yards against Oakland last week as Seattle finished the preseason 4-0.

Duke Thomas, Cowboys — The defensive back was placed on injured reserve after suffering an injury against Oakland.

Geoff Swaim, Cowboys — The tight end is back on the 53-man roster entering his third season in Dallas.

Nick Rose, 49ers — The kicker was waived in favor of veteran Robbie Gould.

Paul Boyette Jr., Raiders — The rookie defensive tackle, who was a captain at Texas last season, was not included on the 53-man roster.

Caleb Bluiett, Jaguars — The tight end, who for a couple days filled in at long snapper, was waived as Jacksonville cut its roster to 75 players last Friday.

Lamarr Houston, Bears — The veteran linebacker was placed on injured reserve after suffering a knee injury in Chicago’s preseason finale.