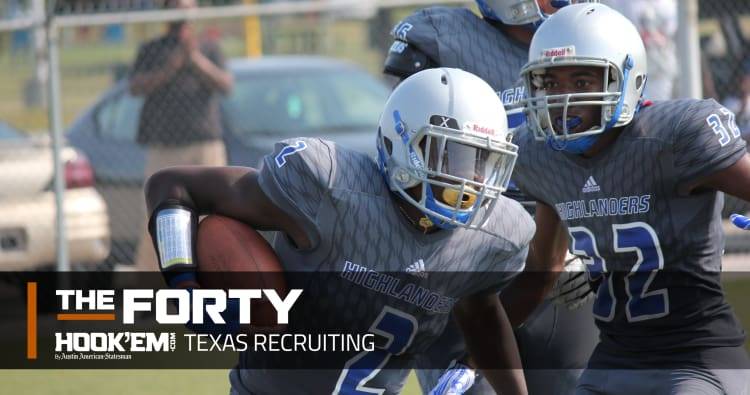 Diamond in the rough

Byron Hobbs isn’t a household name. He’s a 3-star linebacker from Fort Worth Eastern Hills who stayed under the radar as a junior before an explosion of college offers and strong performances at The Opening regional and Under Armour Camp Series raised his recruiting stock. He now sits at No. 37 on the Fabulous 55.

Hobbs and his Eastern Hills teammates began their season with a lopsided victory over Dallas Pinkston. Eastern Hills built a 44-3 halftime lead and Hobbs finished the first two quarters with two sacks, a caused safety and an interception he returned for a touchdown.

At 6-4 and 216 pounds, Hobbs possesses the frame to be an outside linebacker rushing off the edge or could grow into a defensive end.

“I went to the doctor the other day and he said I had two or three more inches to grow,” Hobbs said. “If I get to 6-foot-6 or something like that, I might spin down and play defensive end. Most people view me as a pass rusher so it is a natural move if I outgrow linebacker.”

Hobbs doesn’t care where he plays. He simply wants to play football.

“My position doesn’t matter to me,” Hobbs said. “I just want to get on the field and make an impact as quick as possible.”

Texas spent the entire offseason building momentum as a football program. It felt like that momentum was erased Saturday when the Longhorns fell to Maryland at home 51-41. Immediate concerns popped up on social media about the recruits in attendance and the current group of commits which rank as the No. 2 class in the nation, per 247Sports’ composite.

“It was the first game,” Hobbs said. “More stuff needed to be fixed in Austin than what coach (Tom) Herman and his staff could fix in eight months. Fixing a major program isn’t doable in one offseason.”

In fact, it goes to show recruits like Hobbs that Texas is in dire need of their services, per Hobbs.

“Texas called me after the game to tell me how I was needed on the defensive side of the ball,” he said. “The defense needs help.”

High school football season across Texas and the country is in full-swing. Here were some notable performances from current Texas commits over the weekend.

Blessed to receive and invite to play in the Under Amour bowl !!! And I will like to commit and play in the bowl !! pic.twitter.com/HcuGsLwgxy

On only five carries, Ingram proved he why he’s the top-rated running back in the state. He finished with 137 yards and two touchdowns in a 49-7 victory over Gladewater. Ingram played only the first half and raced 65 yards for a score on his first carry of the season.

Trinity moved to 3-0 with Moore, a future slot receiver and returner at Texas, setting school records with 22 catches for 304 yards and two touchdowns.

Led a Cibolo Steele defense that surrendered only 20 yards in the first half in a win over San Antonio Madison.