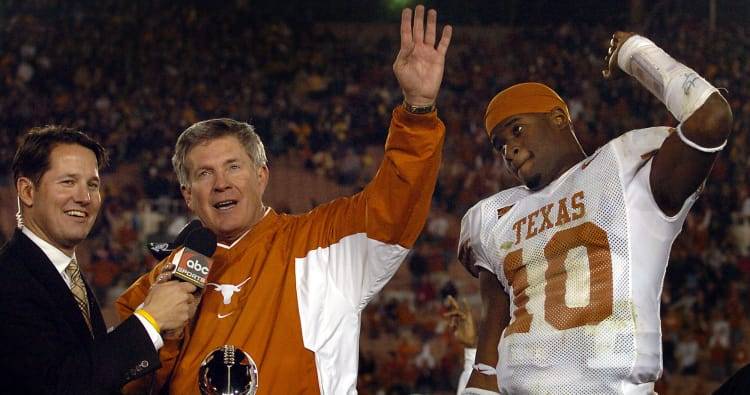 Former Texas coach Mack Brown will be inducted to the Rose Bowl Hall of Fame, it was announced on Tuesday.

Brown led the Longhorns to three postseason games hosted at the legendary venue, including back-to-back wins in the 2005 and 2006 Rose Bowl Games. The latter of those, a 41-38 win over USC in the BCS National Championship, doubled as the most iconic moment of his 16 years coaching Texas.

“I’m beyond flattered, humbled, honored and just feel truly blessed to represent The University of Texas in the Rose Bowl Hall of Fame,” Brown said in a UT press release. “The Rose Bowl is a game I watched and dreamed of being a part of since I was a young college football fan and it fulfilled a lifelong dream to coach in the Grandaddy of them all.

“But this isn’t about me,” he continued. “I can’t thank all of our players, coaches and staff who made the Rose Bowl such a huge part of Texas Football history. They deserve the credit and this is a tribute to all of their hard work, all we did as a program and something I’ll proudly accept for all of us. It’s truly a special, special honor.”

In addition to the triumph over USC, widely considered by many the greatest game in college football history, Brown also led Texas to a thrilling 38-37 win over Michigan in the 2005 edition of the Rose Bowl. In 2010, the Longhorns played in another BCS National Championship in Pasadena, falling 37-21 to Alabama.

RELATED: What a long, strange trip it’s been for Texas, USC

Brown will be inducted in the hall of fame’s Class of 2017 alongside former UCLA quarterback Cade McNown, Michigan legend Charles Woodson and Dr. Charles West, who became the first black quarterback to play in the Rose Bowl in 1922 with Washington & Jefferson.

Brown will receive a trophy and blazer at an induction ceremony, and be memorialized on a permanent plaque at The Court of Champions at the Rose Bowl Stadium with his name and year of induction. He is the first person inducted into the hall for contributions made while at the University of Texas.

The post Mack Brown to be inducted into Rose Bowl Hall of Fame appeared first on HookEm.