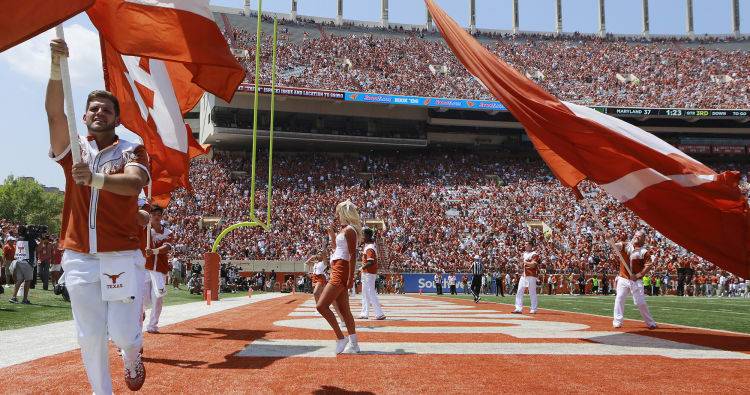 In addition to the debacle on the field — 263 rushing yards allowed, 0-for-4 on fourth down and a blocked field goal returned for a touchdown brought flashbacks of 2016 — Longhorns fans were seen throwing debris onto the turf at Royal-Memorial Stadium.

RELATED: Was Maryland a 1-game hiccup or a true reflection of what the Longhorns really are?

Across social media, many Texas fans posted that they were appalled by the actions of their fellow fans.

As it turns out, there was plenty of goodwill displayed by those in burnt orange, at least according to one Maryland fan who was delighted by his 40 Acres experience. In a post on Reddit, “Maryland fan Dave” thanked Texas fans for their hospitality.

Try to read it without blushing:

I’ve been on several road trips as a Terps fan (columbus, nebraska, temple, penn state, va tech) and I wanted to say, none of them treated me and my friends as nicely as you all did.

From tailgating, to around town experience, to in-game experience EVERYONE was engaging, fun, talkative, generous, and thoughtful. I was randomly invited to several tailgates as I walked past. Took probably 60 pictures – you may have seen me around the stadium wearing my, ahem, beautiful Maryland flag jacket.

But even after the game everyone was nice enough to congratulate me on the win, even though many were obviously disappointed. I responded that I was sorry someone had to lose just b/c I was so impressed with everyone and it seemed a shame someone had to lose with all that craziness on the field.

When Richardson for the Terps was carted off the field, nobody chanted during the silence, but held horns high until he was safely off the field. I’ve NEVER seen this before. Didn’t figure it out until several minutes in, and I’ve never been so proud of people being kind and realizing these are just kids playing a game. Even when Bevo left the field, seeing how thoughtful the handlers were with him was impressive.

I jokingly asked one of the tailgaters about pointing horns down and if that was a bad move. “Don’t do that – only a—— OU fans do that.” I laughed, but was glad I knew b/c I wanted to be just as respectful as Texas fans, and cheer for my team rather than against someone else’s.

I only hope our sometimes too enthusiastic Terps fans could treat visitors as well as you all treated me and my friends.

I’d love to welcome everyone here to my tailgate next year, but unfortunately the game is at the soul-less Redskins stadium and I have no idea where I’ll be. I’ll try to come back here and post my location so I can return the courtesy and love I felt in Austin. Apologies in advance for the experience you’ll have there if you choose to come up. Swing by campus for a visit if you have time – its actually quite beautiful.

Sorry for the long post. I know these are tough times on the football field for Texas (as well as the Harvey fall out for many), but with the support your fans have for the team, its only a matter of time before greatness returns.