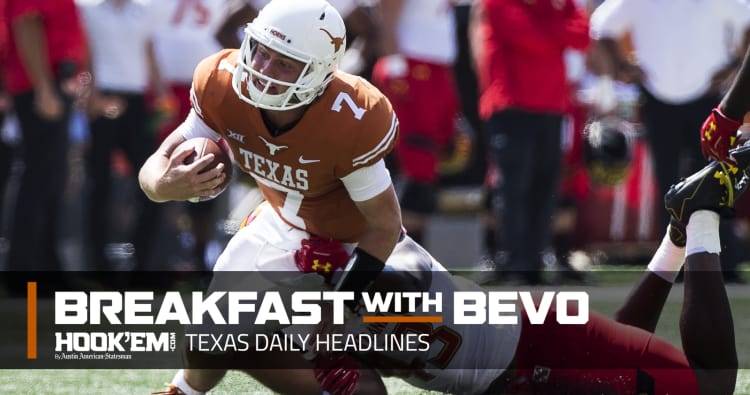 In Charlie Strong’s first game as coach at Texas in 2014, the Longhorns steamrolled North Texas 38-7 and the burnt orange faithful thought the Strong era was well on its way. Not too fast. Starting quarterback David Ash was lost for the season with an injury, and the Longhorns skidded to a 6-7 season. Fast forward three years to the debut of Tom Herman as head coach. After a 51-41 loss to Maryland Saturday, starting quarterback Shane Buechele is out with a bruised shoulder. He’s expected to miss Tuesday’s practice and will be re-evaluated later in the week.

Horns get help at a key position

Kendall Moore transferred in as a graduate student this past summer and plays a position of need on offense. With starting tight end Andrew Beck out for the season and freshman Reese Leitao suspended for two games, Moore’s presence on the offense will be needed on Saturday as he’ll more than likely make his debut versus the Spartans.

Massive Frisco Wakeland offensive lineman Rafiti Ghirmai committed to the Longhorns earlier this year, but according to Hookem.com’s Mike Craven, the four-star 315-lb. recruit hasn’t ruled out visiting UCLA. Ghirmai helped paved the way for his team’s running backs to run for more than 300 yards on Friday.

‘It’s a marathon, not a sprint’

On Monday, Herman faced reporters at his usual weekly press conference, and announced Buechele’s injury. There was no running away from the loss to Maryland. Herman owned it, he says his players own it and he made it clear that while they can’t let that loss linger in the locker room, the Longhorns need to learn from the lessons of the loss. Herman also covered whether he thought his team’s psyche is fragile. The entire recap can be found here.

Two wins over the weekend

Jerritt Elliott’s top-5 volleyball team took care of business over the weekend with a victory over Georgia Tech and a 4-set defeat of No. 17 San Diego. Outside hitter Lexi Sun was named the Big 12’s Freshman of the Week. Over three matches at this past weekend’s USD Tournament in San Diego, Sun contributed 31 kills and a .342 hitting percentage. Competing near her hometown of Encinitas, Calif., Sun was named the MVP of the four-team showcase.

What’s next for the Longhorns?

Beat writers Danny Davis and Brian Davis break down Tom Herman’s press conference and the news that Buechele is hurt: