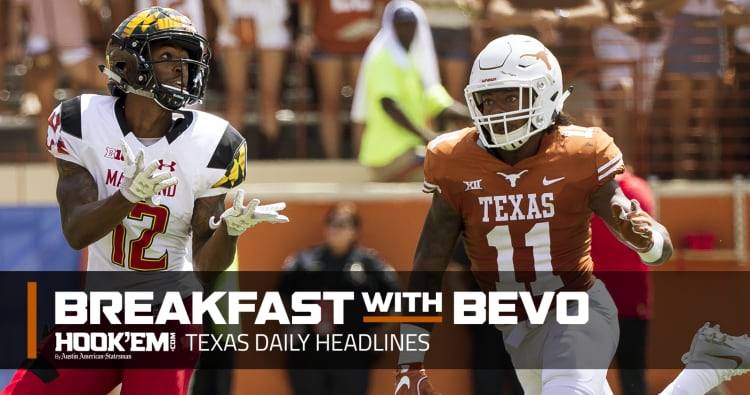 Tom Herman is concerned about bad habits coming back for Texas football players. They popped up in the opening loss to Maryland on Saturday. The Longhorns team leaders held a players’ meeting over the weekend and there was plenty to address. After practice on Tuesday, P.J. Locke III talked about how the Longhorns didn’t look like the team from fall camp. As Texas prepares to bounce back, they’ll likely have to do so with Sam Ehlinger at the helm as Shane Buechele nurses a shoulder injury. The freshman QB took all of the first team snaps in practice Tuesday for the Saturday game against San Jose State.

What has Mack Brown done to deserve an induction into the Rose Bowl Hall of Fame? Oh, probably just coached the winning Texas team in arguably the best game in the rich history of the Granddaddy of Them All. In addition to the classic 41-38 win over Southern Cal in the BCS National Championship in 2006, Brown also coached Texas to a barn-burning win over Michigan at the Rose Bowl the year before. Brown will join Cade McNown, Charles Woodson and Dr. Charles West in the induction ceremony it was announced Tuesday.

Byron Hobbs, who has committed to play for Texas, was unperturbed by the loss on Saturday. Hookem.com recruiting writer Mike Craven shares Hobbs’ take on the result. He also recaps the weekend for Longhorns recruits playing under the Friday night lights.

The University of Texas athletics department announced Tuesday that those displaced from their homes can claim free tickets to the contest between Texas and San Jose St. UT will also host first responders and their families at the game Saturday.