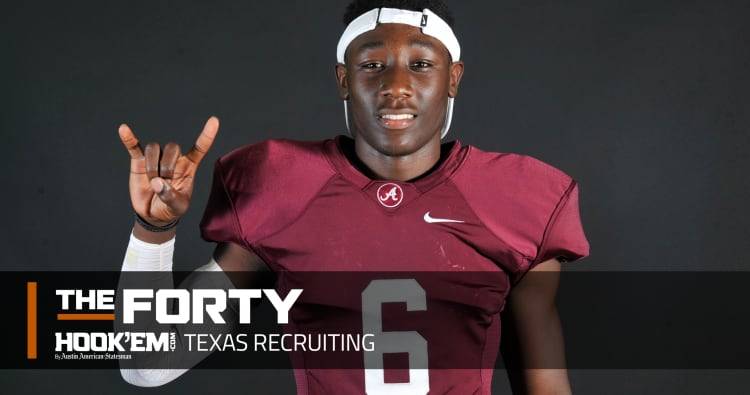 Stay updated on the latest Texas Longhorns recruiting news brought to you by Longhorn recruiting beat writer  Mike Craven of Hookem.com. The Forty will publish M-F at 10 a.m. each morning to provide Texas fans with an in-depth look at the latest for the Longhorns on the recruiting trail.

Texas commit DeMarvion Overshown went from unheralded and relatively unknown to a consensus 4-star safety prospect with offers from elite programs across the country. The 6-foot-4, 200-pound defender committed to Texas on May 31.

Overshown ranks No. 11 on the Fabulous 55. He’s the No. 75 prospect in the country and the No. 7 ranked safety in the 2018 class, per 247Sports.com. Overshown is committed to play in the Under Armour All-America Game in Orlando after his senior season and has spent time at defensive end, linebacker and safety in his high school career at Arp.

Thanks for the birthday wishes

I was 7 years old when I first started playing football. I was always a football guy, even though I started playing basketball first. I play other sports, but football was the sport that became my favorite as a kid.

Texas was always a school  I grew up watching. It was one of my dream schools.

To become a better leader and help our team reach a state championship.

I wanted a place where I could have fun and win football games. To be around people I can trust, both coaches and players. It needed to feel like a home away from home.

It doesn’t matter to me where I play. Wherever they put me is fine. I just want to be somewhere on the field making bit hits and chasing down the ball.

When the playoffs come around, it is basketball.