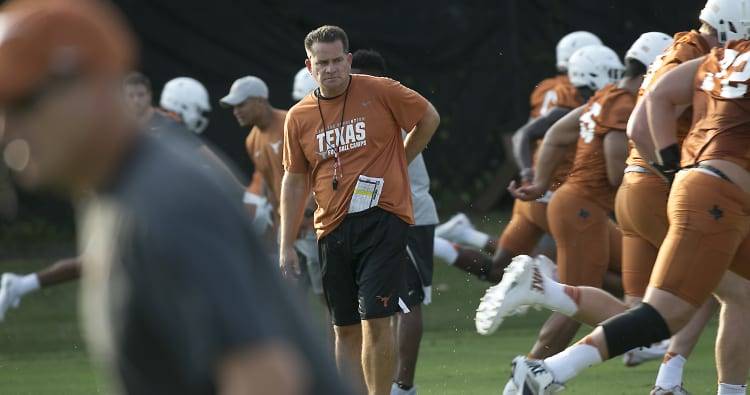 Few players can miss major game-plan installation during the week and still start on Saturdays. Texas will lighten up on Thursday and Friday to get ready for this week’s game. “Hard to look into the future,” Beck said.

So it would appear that Ehlinger could start. After all, wouldn’t Texas be better served by resting Buechele against a 28-point underdog and saving him for next week’s game at USC and the Big 12 schedule anyway?

“Sam’s a competitor, let’s start there,” Beck said after Wednesday’s practice. “He’s going to do everything in his power that if we need him to play on Saturday, he’ll be ready. The way I look at him and what he has done, he has done nothing but improve since the first day he walked in these doors.”

Defensive coordinator Todd Orlando said Tuesday’s practice was “was as good as we’ve had around here.”

Changing quarterbacks after just one game isn’t ideal. Buechele is a locker-room favorite, having gone through the battles and performed well during the 2016 season with many of these same players. He’s 5-8 as a starter, though. Ehlinger has yet to take a collegiate snap.

“We’re going to trust in anybody they put back there at quarterback,” left tackle Connor Williams said.

Beck said Ehlinger has exemplified “all the attributes, characteristics you’d want in that guy.”

“The question always comes up, ‘How doest he team feel?,’” Beck said. “I think the team will follow him. I think the coaches respect him. He’s a hard-working young man, a great student and he does everything right. How do yo not follow one of those guys?”

Abandon the run?: Texas never established its running game against Maryland, and Beck said the Horns had to go into pass mode because the score got out of hand early.

Still, the Longhorns got within three points midway through the third quarter after Reggie Hemphill-Mapps’ 91-yard punt return for a touchdown. On UT’s next possession, both Jerrod Heard and Lil’Jordan Humphrey had positive running plays, and Buechele scored on a 3-yard run.

But Maryland went back up by 10 with 7:34 remaining, and Texas had to keep throwing. “I just felt like just keep doing what we’re doing right now, because it was working,” Beck said.

Chris Warren III and Kyle Porter combined for only 14 carries, six after halftime.

“I still love the offensive line,” Beck said. “Communications issues were the biggest thing. It wasn’t talent, it wasn’t toughness, it wasn’t heart. it was communication issues.”

How much data did Longhorns fans use Saturday? 3.9 million selfies worth

Longhorns in the NFL: Former Longhorns gear up to kickoff season