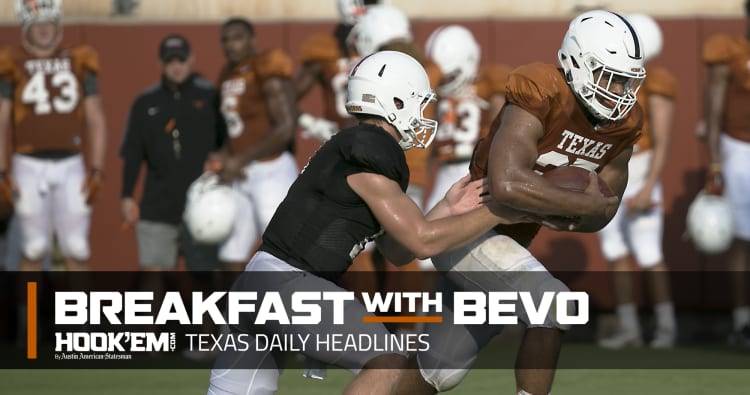 American-Statesman columnist Kirk Bohls is right. If the Longhorns and Aggies renewed their rivalry on the football field, at least one of the teams would have something to feel good about. That’s just one of Bohls’ nine things this week. His crazy prediction at the end of the column doesn’t have a chance of coming true. Or does it?

Shane Buechele missed practice again on Wednesday as freshman Sam Ehlinger worked with the first team. It would be asking a lot for Buechele to miss practice and start Saturday, but offensive coordinator Tim Beck hasn’t ruled that out yet. On the defensive side, coordinator Todd Orlando liked what he saw in Wednesday’s practice.

Season debut for the Whys of Texas

Longhorns beat writer Brian Davis took a look into his mailbag after the upset loss on Saturday. Longhorns fans weren’t shy about sharing their opinions. One was arguing for cold pancakes while another lamented over waking up at 6 a.m. to watch a game that reminded him of Manny Diaz defenses.

Q and A with DeMarvion Overshown

Recruiting writer Mike Craven talked with DeMarvion Overshown, a safety committed to play for Texas, who is currently ranked No. 11 on the American-Statesman’s Fabulous 55.

A new look at setter for Texas volleyball

Setter Ashley Shook didn’t get to campus until August, but she’s leading the Longhorns in assists and provides a new look at the position, standing 6-foot-1. Last year the leader in assists, Chloe Collins, stood at 5-7.

Texas will take on Mississippi for the first time since 1976 at the Big 12/SEC Challenge. The challenge features 10 games between teams from the two conferences. The Longhorns will host Mississippi on Saturday, Jan. 27, at 1 p.m.

How much data did fans use at the Texas game Saturday?

They used the equivalent of 3.9 million selfies, according to AT&T.

Longhorns in the NFL: Former Longhorns gear up to kickoff season