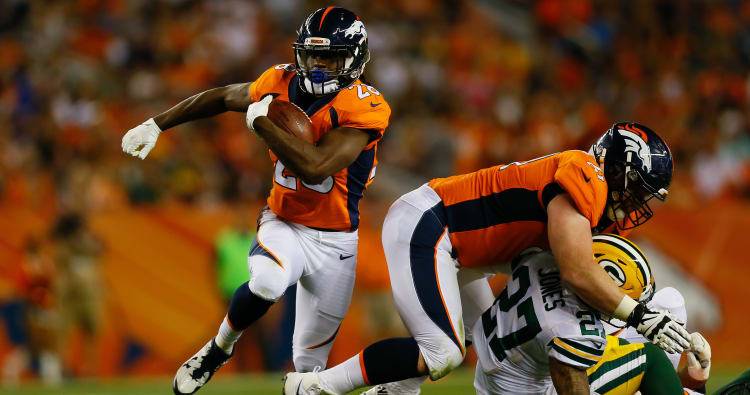 Is there such a thing as a former Longhorn? These players will always be Longhorns to University of Texas fans, even though they’ve graduated to the next level of football. Every week we’ll update you on how they performed the previous weekend. Here’s a look at the Longhorns in the NFL and what they’re looking forward to in the season opener.

Jamaal Charles opened some eyes when he flashed some of what he’s got left in the tank in the third week of preseason. He won’t be the starter, with C.J. Anderson expected to take most of the touches, but Charles will get quality opportunities. The Broncos close out Week 1 as they host the Chargers in the late Monday night game. Here’s how he looked two weeks ago.

Colt McCoy will once again serve as the backup quarterback in Washington. He had a tough weekend, much like any Longhorns fan, as he had to pay up on a bet he made with a reporter for CSN.

Colt McCoy is a man of his word, and his bet with @JPFinlayCSN on the #Terps vs #Texas game hit him where it hurt pic.twitter.com/qSZKrtBnZ7

Marcus Johnson kept making plays in the preseason and was rewarded with making the Eagles’ 53-man roster. He’s one of seven receivers the Eagles kept and could make his NFL debut at Washington on Sunday.

New number and another TD for Marcus Johnson. #FlyEaglesFly pic.twitter.com/hUKXdV4t07

RELATED: Former Longhorns who won’t start the season on a 53-man roster.

D’Onta Foreman, RB, Texans—The rookie missed the last two games of the preseason but should be good to go for the opener against the Jaguars. The 2016 Doak Walker award winner looked great in the first two preseason games. He might make an impact if the Texans take a run-heavy approach in facing the Jaguars.

Marquise Goodwin, WR, 49ers—Goodwin is being guided by former Longhorn and offensive guru Kyle Shanahan in San Franciscos. He’s been making big plays in the offseason, but we’ll see if that translates to real games when the 49ers host the Panthers on Sunday.

Derrick Johnson, LB, Chiefs—He returns from another season-ending injury to lead the Chiefs defense. His Chiefs open the season on the road to take on the Super Champion New England Patriots.

Kenny Vaccaro, S, Saints—Vaccaro and his Saints travel to Minnesota in the first game on Monday night. The Saints look to improve over last year’s campaign and Vaccaro is crediting a former Aggie, of all people, with changing things for the better.

Quandre Diggs, CB, Lions—Diggs is listed as the third-string cornerback though he played with the first team nickel package last season. Watch how he does as the Lions host the Cardinals in opener.

Malcolm Brown, RB, Rams—Brown has looked like a very capable backup to Todd Gurley in the preseason. With Lance Dunbar missing time, Brown is the first back off the bench when Gurley needs a rest. The Rams host the Colts to open the season Sunday.

Geoff Swaim, TE, Cowboys—Swaim once again made the Cowboys’ roster as Dallas is keeping four tight ends on the team. They’ll take on the Giants in the Sunday night opener.

Trey Hopkins, OG, Bengals—The former Longhorn is hoping to start at guard for the Bengals. Cincinnati hosts the Ravens on Sunday.

Hassan Ridgeway, DT, Colts—The defensive tackle will be a part of the rotation as the Colts travel to Los Angeles to open the season against the Rams on Sunday.

Justin Tucker, K, Ravens—Another former Longhorn kicker that could play for quite a while is Tucker. He’s been so good as a Raven so far in his career. He travels to Cincinnati to open the season.

Brian Orakpo, LB, Titans—Orakpo hit the reset button on his career when he joined the Titans two seasons ago. He has 17.5 sacks in the last two years and opens this season hosting the Raiders Sunday.

Jordan Hicks, LB, Eagles—He was dealing with a groin injury but is ready to start the opener against the Redskins.

Fozzy Whittaker, RB, Panthers—Whittaker will serve as a passing option out of the backfield this year. The former Longhorn running back, a native of Houston, will have a fundraiser in Charlotte to help his hometown recover from Hurricane Harvey.

Adrian Phillips, S, Chargers—The defensive back will back up Jahleel Addae at strong safety. The Chargers open the season at Denver where Phillips may come face to face with another former Longhorn, Jamaal Charles.

Malcom Brown, DT, Patriots—Brown is still listed as a starting defensive tackle on the Patriots depth chart despite a demotion at one point last season. He’ll open the season hosting the Chiefs.

Sam Acho, LB, Bears—Acho and the Bears have a tall task to open the season as they host the Falcons Sunday.

Roy Miller, DT, Chiefs—Miller should make his regular season debut with the Chiefs against the Patriots if his hamstring doesn’t act up.

Alex Okafor, DE, Saints—Okafor is expected to be a regular on defense for the Saints as they look to improve from last season’s poor performance.

Brian Robison, DE, Vikings—He’s in danger of missing the opener due to a leg injury, but don’t be surprised if he ends up starting as he faces Adrian Peterson and the Saints.

The post Longhorns in the NFL: Former Longhorns gear up to kickoff season appeared first on HookEm.