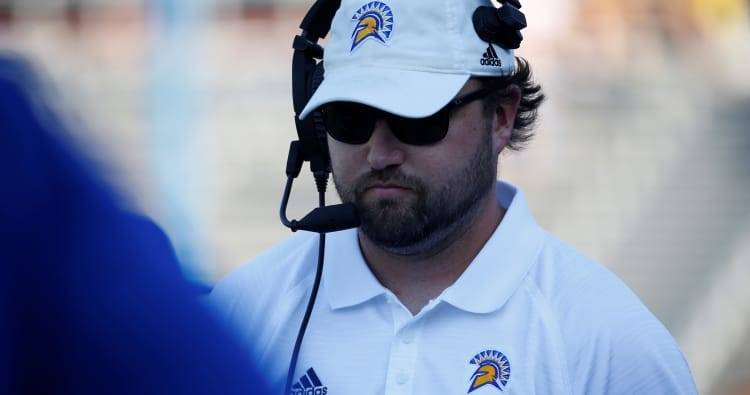 Andrew Sowder booked a one-day trip to San Jose State on Jan. 6 to meet with his third potential boss in less than two months.

Sowder, 28, was working as Texas’ offensive quality control coach, trying hard to impress new Longhorns coach Tom Herman, who had retained him on his staff after replacing Charlie Strong.

As Sowder recalls, Brennan hadn’t even gotten the offer out of his mouth before he’d pounced on the opportunity. Now Sowder, a former Baylor tight end, is the youngest offensive coordinator in college football.

“It was a fun night,” Sowder recalled in his office at San Jose State, two days after the Spartans’ season-opening loss to Strong’s South Florida Bulls. “It was supposed to be one of those deals where you fly in one day and go back home the next. I ended up staying for almost a week studying recruiting tape and needed to go to Target to buy clothes.”

Sowder wanted to hit the ground running, a lesson he’d learned from Herman during his short stint on the new Texas coach’s staff. He watched Herman’s sense of urgency and studied the new staff’s recruiting habits and strategies. Sowder even helped Herman and the staff orchestrate the first weekend of official visits for Herman last December.

Sowder was raised in Shallowater, near Lubbock. A self-described Big 12 guy, he lived out one of his dreams by playing for Baylor; he was a wide receiver and tight end there for the 2007 and 2008 seasons before moving on to a graduate assistant’s role there on Art Briles’s staff.

His first full-time coaching job came in 2011 at West Texas A&M as the running backs coach. He spent time on offensive staffs at Eastern Illinois and Bowling Green as a receivers coach before joining Strong’s Texas staff in 2016 as a quality control coach, spending most of his time with the wide receivers group. His time at those two schools also helped him get close with Sterlin Gilbert, who was the offensive coordinator at both. Gilbert, who was Texas’ offensive coordinator last season, followed Strong to South Florida.

That made this year’s opener a surreal experience for all involved.

“Sterlin and I talk once a week, but we didn’t talk about the opener all summer,” Sowder said. “It was exciting to call my first game, especially with Charlie (Strong) calling the defense on the other side with Sterlin (Gilbert) calling the offense.”

He’s using challenges like South Florida and Texas to learn on the job and narrow the gap between him and seasoned coordinators across the country. Sowder doesn’t believe his lack of age adds pressure. He will acknowledge that it means his growth is far from over.

“Nothing prepares you for your first coordinator job,” he said. “You take it day by day and learn through experience. Try to be organized and get staff on same page. I’m learning new stuff every day. You’re never ready for the job you take until you experience it.”

This week won’t be any less memorable for Sowder, who returns to Royal-Memorial Stadium as an opposing offensive coordinator just one year from helping Texas behind the scenes.

“I started thinking about the Texas game the day I interviewed out here, because it was on the schedule,” he said. “I have so much familiarity with Texas from working on the previous staff, the time I spent on Herman’s staff, plus I know all the players. I’ve been to DKR Stadium as a fan, a player and a coach for Texas. Now I’ll add coaching there as an opposing coach.”

Texas fans should expect a familiar offense when the Spartans take the field. Sowder comes from a tree of coaches who run the same offense that Texas used in 2016. It’s an Air-Raid scheme with power. Sowder also added his own flavor as a coordinator.

“We want to use the tight ends more,” he said. “The idea is the same, however. We want to use tempo and throw the ball around, while being physical and balanced with the run game.”

Through two games, San Jose State ranks 63rd nationally in total offense, 55th in rushing, 55th in passing and is tied for 77th in scoring, averaging 28 points a game.

Sowder knows his team is the David to Texas’ Goliath this week despite the Longhorns’ loss to Maryland. Texas is still Texas.

“Todd Orlando is a great coach and he has a lot of good players to use. It will be a huge challenge,” Sowder said. “It’ll be like playing chess against Bobby Fischer, but it’ll be fun to be back in Austin and on the sideline.”