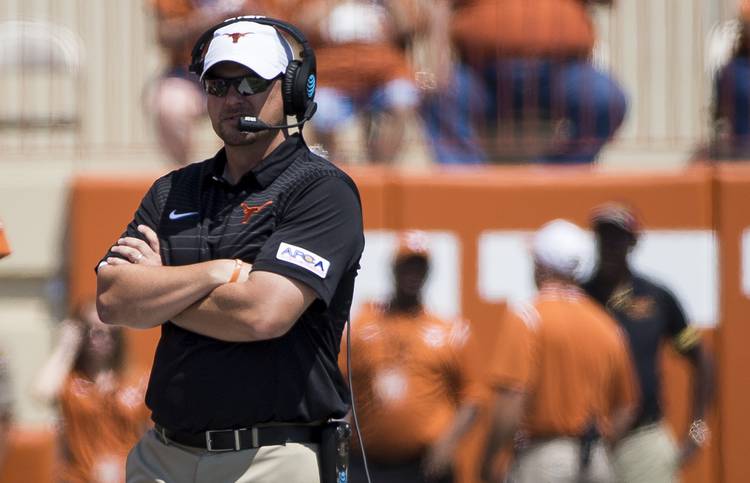 Texas head coach Tom Herman looks down the sideline during the first half of an NCAA college football game against Maryland in Austin, Texas, on Saturday, September 2, 2017. NICK WAGNER / AMERICAN-STATESMAN

According to CBS Sports’ Dennis Dodd, Meyer said it drives him “insane” when coaches blame inherited players after taking over a program. He took particular note of Herman, his former assistant, and the Longhorns.

“C’mon man. I don’t know where that came from,” Meyer said. “It’s like a new generation of excuse. [Herman] said, ‘I can’t rub pixie dust on this thing.’ He got a dose of reality. Maryland just scored 51 points on you.”

Meyer was referring to a quote from Herman after the Longhorns’ 51-41 loss to Maryland, when the Texas coach said that if people thought he could “sprinkle some fairy dust on this team and think that we’ve arrived, then we’re wrong.”

Herman and Meyer worked together before when Herman was the offensive coordinator at Ohio State from 2012-2014.

Herman has repeatedly said that the Longhorns don’t have the depth they need to compete for a championship. That stood in contrast to what former coach Charlie Strong said last year about the roster being ready.

Maryland entered the game against Texas as an 18-point underdog. After the loss, the Longhorns fell from No. 23 to entirely out of the AP Top 25 Poll, not even receiving a single vote this week.

Texas will have a shot to get back on track Saturday when the Longhorns host San Jose State. Kickoff is set for 2:30 p.m. CT.

The Week 2 guide to watching Texas commits in action