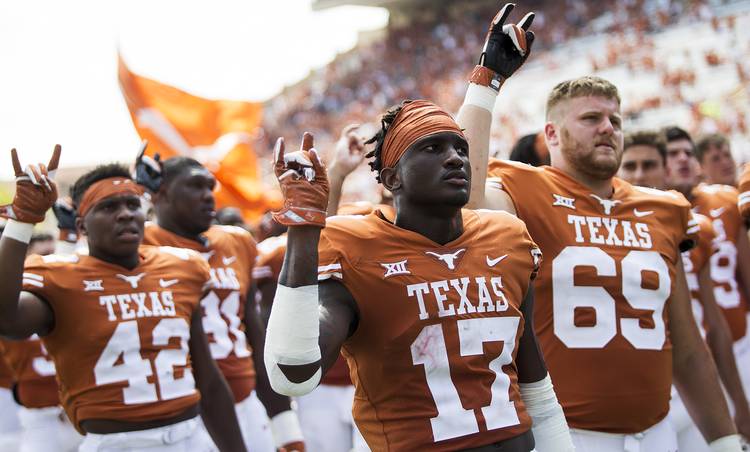 Texas players gather near the marching band for the playing of Eyes of Texas after Maryland defeated Texas 51-41 in an NCAA college football game in Austin, Texas, on Saturday, September 2, 2017. NICK WAGNER / AMERICAN-STATESMAN

The one constant has been the players themselves. The roster hasn’t changed much from last year to now. It’s time the players own a 16-21 record over the last three years, a 5-7 mark last season and the 0-1 start under Herman.

There’s an old adage: Players win games, and coaches lose games. Two different coaching staffs have taken plenty of heat since the start of the 2014 season. Against San Jose State on Saturday, Texas players might do well to start taking accountability for themselves.

“We’ve just got to give coach Herman all we got,” said receiver Collin Johnson, who led the team with seven catches for 125 yards and a touchdown in the opener. “We’re just wiling to do whatever he asks of us, because he knows what he’s doing. He’s a phenomenal coach and we can’t get swayed by what everybody else is saying.”

Defensive tackle Poona Ford bristled at the idea that nothing’s changed inside the locker room. “I know you all (the media) don’t really see it, but a lot of players have spoken up,” Ford said.

Talking is one thing this team does really well. This week brought about yet another team meeting. Those haven’t worked in the past, though. The Longhorns had barbecue cookouts, ping-pong tournaments and swimming parties each of the last three summers to foster team bonding. None of those translated to overwhelming success on the field.

Asked about this week’s get-together, senior Naashon Hughes said, “We just had to make sure that each and every guy on the team, that wanted to be there, was still on the same mission. That we’re all on the same page as a team and as a unit.”

The players are tired of facing the same questions about this program’s lack of success. Former quarterback-turned-NFL tight end Tyrone Swoopes would grin and bear it, but he never liked facing reporters. The questions were always the same: Why isn’t this team winning?

Herman learned firsthand this week how difficult Austin can be when things go haywire on Saturdays. Texas was an 18-point favorite against Maryland. There was palpable excitement among the coaching staff, the players, the fans, talk radio, Internet chat rooms and, yes, even the media that things were different. It sure felt different, anyway.

Instead, the Longhorns allowed 263 rushing yards against a middling Big Ten squad and lost 51-41.

The players have followed their head coach’s lead this week by repeating the well-worn cliché, “We can’t let Maryland beat us twice.”

Herman looked uncomfortable for the first time during Monday’s press conference. Forced to watch the highlights again, he appeared downright miserable during the coach’s show on Longhorn Network.

As if that wasn’t bad enough, Herman’s former boss Urban Meyer blasted his one-time offensive coordinator and said the UT coach was making excuses for losing. “He got a dose of reality. Maryland just scored 51 points on you,” Meyer said Thursday.

Herman did not return fire late in the week. “I don’t have time to worry about comments made by somebody else and their program,” he said. “I’m worried about our program and winning a game.”

The Longhorns are likely to change quarterbacks this week. Odds are freshman Sam Ehlinger will start for the injured sophomore Shane Buechele, who injured his throwing shoulder against Maryland. Herman would not tip his hand during Thursday’s media availability. However, it’s unlikely Buechele could miss multiple practice days like he has and still play.

San Jose State is expected to start a freshman as well. Montel Aaron has completed 18 of 30 passes for 269 yards and four touchdowns in two games this season. Maryland sent in a freshman midway through the second half and finished off the Longhorns.

In practice and meetings this week, Herman kept the mood light. After Thursday’s practice, the team had a water balloon fight. The coach said winners focus on solutions, losers on problems. “Winners take responsibility, losers blame others,” he said.

“We’ve really harped on our guys that you can’t live in the past,” Herman said. “Do we want to learn from those mistakes and make sure that we do everything we can this week to not repeat them? Absolutely. But we’re going to enjoy the present. We’re going to enjoy this week and the opportunity we have to go 1-0 and play a really good team in front of our home fans again.”

“But to sit here and go into Thursday and still have that, that is a loser mentality. We can’t have that here,” Orlando said.

In all reality, that’s all Herman, his assistants and these players can do at this point. Move forward. There’s a lengthy season and far greater challenges ahead.

San Jose State (1-1) started the week as a four-touchdown underdog, according to Las Vegas oddsmakers. UT’s quarterback change lowered that line a tad, but still, the Longhorns should do well. On paper, they have the overwhelming size and speed advantage over the Spartans.

But Texas fans know that’s been the case in previous games, too.

Can team captains Hughes, Ford, P.J. Locke III and Connor Williams truly pull this group together? They’re the ones who have to live with the results.

Texas vs. San Jose State: A Q&A with a Spartans beat writer