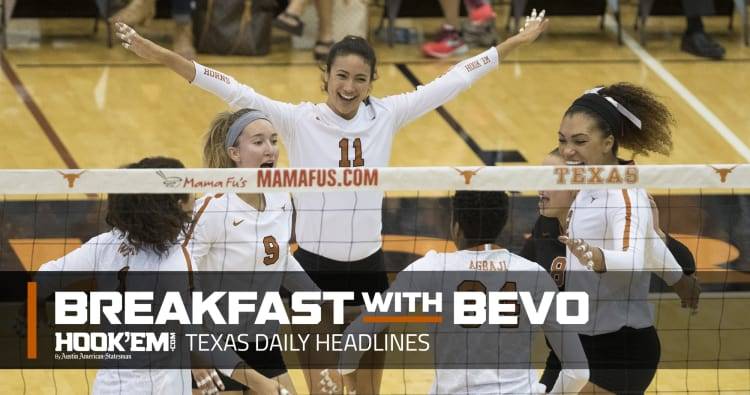 American-Statesman columnists Kirk Bohls and Cedric Golden talk with legendary Texas football coach Mack Brown on their podcast this week. Brown talks about his induction into the Rose Bowl Hall of Fame and the Longhorns’ current situation under Tom Herman.

Sound Off: A preview of Texas-San Jose State

Texas beat writer Danny Davis joins recruiting writer Mike Craven this week for Sound Off. They talk about the disappointing loss to Maryland and look ahead to San Jose State. One question they address: Is freshman quarterback Sam Ehlinger ready to lead Texas against San Jose State if Shane Buechele can’t play?

Andrew Sowder, 29, was a quality control coach last season at Texas. He jumped at the opportunity to become OC at San Jose State in January.

The Longhorns notched two wins at Gregory Gym Thursday as they prepare to take on top-ranked Minnesota on Friday at the American Campus Classic. Texas is now 6-1 with a big match coming up.

Longhorns beat writer Brian Davis touches on Urban Meyer’s comments about what Tom Herman said after the 51-41 loss to Maryland on Saturday.

Craven has you covered if you’re looking to track the Texas Longhorns recruits in action this week. Fans can catch two recruits, Caden Sterns and Cameron Dicker, in action at the Cibolo Steele-Lake Travis game Friday at Lake Travis High School.

Longhorns in the NFL: The start of the season

Keep up with the Texas Longhorns in the NFL all season long. We’ll let you know how they did every week. Thursday night DT Malcom Brown and the New England Patriots fell 42-27 to LB Derrick Johnson, DT Roy Miller and the Kansas City Chiefs in the season opener.