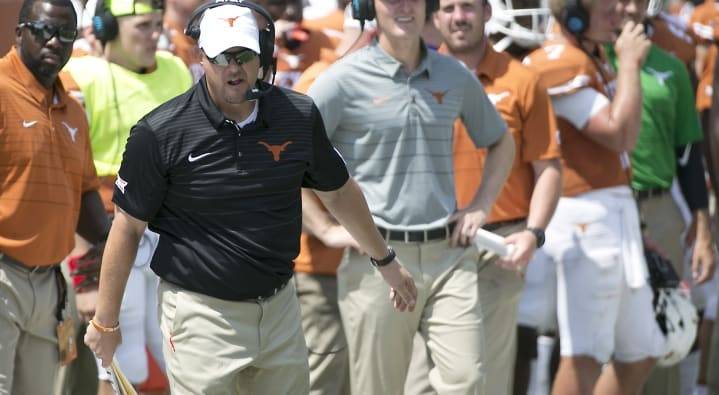 Fifty-six is the number worn by sophomore center Zach Shackelford. The next 300-yard passing performance by a UT quarterback will be the 56th in school history. Over his first two years at Texas, junior Michael Dickson had fair catches called on 56 of his 142 punts.

Texas went for it on fourth down four times in last week’s 51-41 loss to Maryland. The Longhorns didn’t have much of a choice on an attempt that occurred in the game’s waning minutes. The team, though, certainly could have sent out its punter or kicker on fourth-down snaps from the Maryland 5, 36 and 44.

That, though, isn’t Herman’s style.

Texas failed to convert on all four of its attempts, but those calls weren’t second-guessed this week. Herman told reporters he has invested in a system that gives analytical breakdowns for various fourth-down situations. Herman said the analysis —which is kept in a color-coded binder — backed his decisions to go for it.

“Now we’ve got to do them better, obviously, or else the binder is going to start saying not to do them,” Herman said.

Here are some other tidbits about Houston’s fourth-down attempts during the Herman years:

San Jose State, meanwhile, has struggled to get stops on fourth down. Over the past two weeks, South Florida (three) and Cal Poly (one) were perfect on their fourth-down tries against the Spartans. Last year, San Jose State stopped only two of the 14 attempts it faced.

“What makes it tough to prepare is that they have so many good players at so many positions,” Brennan said this week. “In terms of whether or not they go for it on fourth down, you don’t prepare for it. You’re just ready for it if they do.”

On back-to-back drives against Maryland, quarterback Shane Buechele was unable to connect on fourth-down passes to Garrett Gray and Chris Warren III. He also took a fourth-down sack near midfield in the fourth quarter, a play that set up Maryland’s game-sealing drive.

Offensive players have taken note of their new coach’s fourth-down inclinations. They also must know an 0-for-4 performance isn’t going to cut it. Wide receiver Collin Johnson said this week that practice makes perfect “so when a game comes around, it’s just second nature.” Texas was 11 of 22 on fourth downs last year.