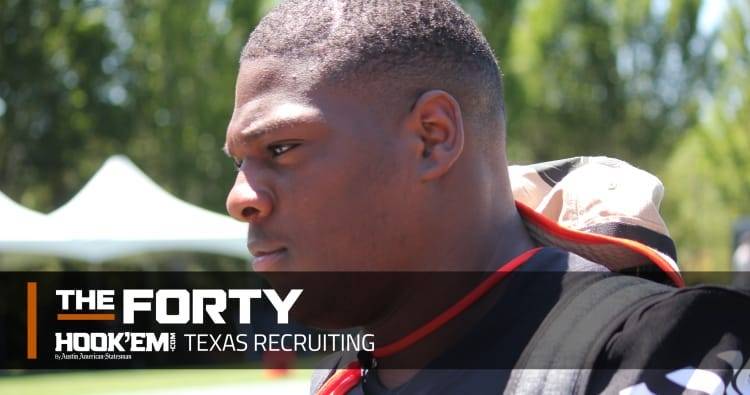 Texas hosted numerous top-rated prospects from the 2018 and 2019 classes during the season-opening Maryland loss. The Longhorns hope to give the crop of visitors for the San Jose State game on Saturday a better show. It’s an important recruiting weekend for Tom Herman’s program because of a pair of out-of-state defensive linemen and an in-state receiver from the 2019 class:

Texas’ lone defensive line commit for 2018 is Keondre Coburn, a 300-plus pound tackle from Spring Westfield. Perkins holds 32 offers and is high on Texas, Oklahoma, Michigan and LSU. This is an important weekend for Texas to secure its place among his favorite schools. Perkins competed at The Opening Final and will participate in the U.S. Army All-American Game in San Antonio.

The Longhorns hold the No. 2-ranked recruiting class in the nation, but it will feel like a disappointment for the staff if they can’t reel in at least one defensive end with pass-rushing skills. It’s a weak year for pass rushers in the state behind Texas A&M commit Max Wright and Aggies lean Joseph Ossai. Texas must search beyond the borders for a long, disruptive defensive end. Carson’s frame and current size mean he could also grow into a traditional defensive tackle in Todd Orlando’s odd-man front.

Texas’ 2019 class began in July when 4-star quarterback Roschon Johnson of Port Neches-Grove committed to the Longhorns. Texas hopes to add a second member to the class on Oct. 1 when Whittington, a 5-star wide receiver who included Texas in his final four along with Florida, Texas A&M and UCLA. Whittington is a dynamic playmaker on both sides of the ball. He recorded a touchdown as a rusher, receiver, returner and a defender as a sophomore.

The value of momentum

Texas spent six months building recruiting momentum for the 2018 class. One loss won’t erase the progress. The Longhorns hold the No. 2 class in the nation and it currently stands at 18 commitments. The 2019 class already has a quarterback commit and the Longhorns lead for a handful of in-state talents remaining in the 2018 and 2019 classes.

It’s too early to panic. The loss to Maryland can be used as leverage for Texas. If anything, it showed recruits that the Longhorns need help on both sides of the ball. By the time the 2018 class arrives on campus, is there any position on the team that should truly be locked up by an upperclassman?

Not with more performances like the 51-41 loss. Texas needs more talent.

Immediate playing time is one of the first things mentioned by recruits when asked what they specifically want in a school. Players want to play. Texas’ goal over the next few months is to win games and if it loses a few more, remind the next crop of prospects that a lack of current success for the team could equate to future success for the next recruiting cycle.

“My hopes are to come in and haven an immediate impact on the defensive side of the ball,” said linebacker commit Byron Hobbs after watching Texas lose to Maryland.

Even the quarterback position should be viewed as open by incoming recruits, as 4-star Cameron Rising mentioned after his team’s first game of the season.

“The cream will rise to the top,” Rising said. “Tom Herman isn’t the type to play favorites so the job will be open on a year-to-year basis unless it is clear one person is far better than the rest of the roster. I think I’m going in there with a chance to compete right away and my goal is to start as soon as possible.”

Texas vs. San Jose State: A Q&A with a Spartans beat writer