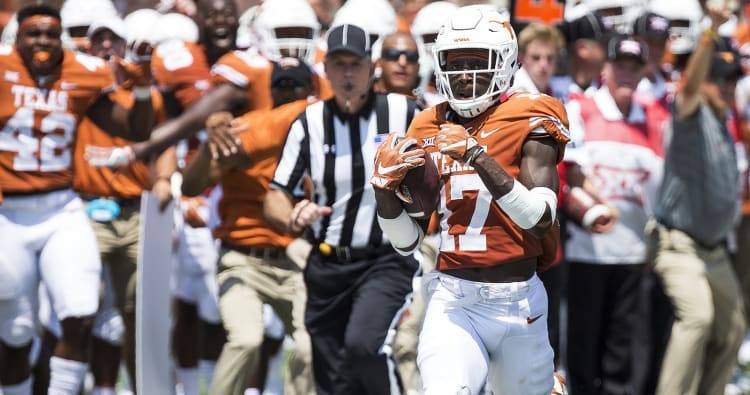 1. So, who’s going to start at quarterback?

You would have thought that Tom Herman would have fielded fewer questions this week about the quarterback position after Shane Buechele threw for 375 yards against Maryland, but here we are. Buechele missed practices this week with a bruised right shoulder, which has opened the door for Sam Ehlinger (and maybe a Jerrod Heard appearance). Herman told reporters on Thursday that Buechele would be a game-time decision.

2. Will Texas shut down the Spartans’ top receiver?

Last year, Texas gave opposing receivers including Oklahoma’s Dede Westbrook (10 catches, 232 yards and 3 touchdowns), Cal’s Chad Hansen (12-196-2) and Oklahoma State’s Jalen McCleskey (4-109-2) plenty of footage for their highlight reels. That trend continued last week as Maryland’s D.J. Moore had 7 catches for 133 yards and a touchdown. Can Texas shut down San Jose State top target Bailey Gaither, who is averaging 17.3 yards per catch and has scored on 3 of his 9 receptions?

3. Will either Collin or Kirk Johnson star against their hometown team?

Texas receiver Collin Johnson hails from San Jose as does his brother Kirk, a Longhorns running back. While meeting with reporters on Tuesday, Johnson recalled attending San Jose State games and being recruited by the Spartans. San Jose State’s roster includes two of the Johnsons’ former teammates at Valley Christian High: offensive lineman Charles Nelson and defensive lineman Cameron Woodard. Which ex-Valley Christian Warriors star will have the biggest game at this reunion?

4. Will Texas’ special teams be … special?

Texas scored last week on a blocked field goal and a 91-yard punt return, but special teams coordinator Craig Naivar still had a lot to work on this week. During that 51-41 loss to Maryland, Texas also missed a field goal, had a blocked field goal of its own returned for a touchdown and lost the football on a muffed kickoff return. Special teams have been a problem at Texas for a while now. Will things finally start to turn around?