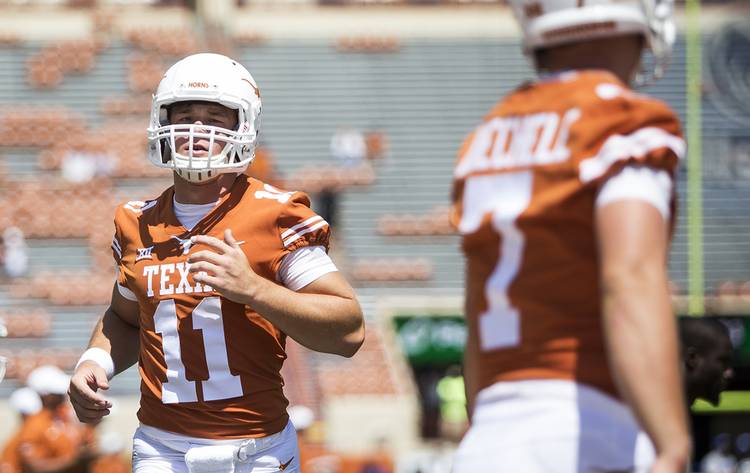 Texas freshman Sam Ehlinger will get his shot on Saturday.

Ehlinger, the Westlake product who was an early enrollee this past spring, will start Saturday afternoon against San Jose State. Shane Buechele, a sophomore who has started the last 13 games, was slowed this week by a bruised throwing shoulder. Ninety minutes ahead of Saturday’s kickoff, the school announced that Buechele had been ruled out.

Ehlinger sat last week as Buechele threw for 375 yards and two touchdowns in a 51-41 loss to Maryland. Outside onlookers will now get a chance to see the quarterback that UT players and coaches have boasted about.

On Wednesday, Texas defensive coordinator Todd Orlando described Ehlinger as scrappy. Wide receiver Collin Johnson said the freshman is “a competitor. He’s been doing a good job.” Defensive back P.J. Locke III mused to reporters on Tuesday that the uber-competitive Ehlinger is “insane.”

“He’s a nitty and gritty guy, he’s a very confident guy, he’s not scared to drop him shoulder at all, even though he plays quarterback,” Locke said. “If it so happens that he gets the starting job, I’ve got his back. We’ve got his back.”

Been a Longhorn since day one, I’m truly blessed to say I am committed to the University of Texas. #hookem pic.twitter.com/v4SigYV2A6

Saturday’s start will be a milestone moment for Ehlinger, a lifelong fan of the Longhorns who was coached in high school by ex-UT quarterback Todd Dodge. Ehlinger received a scholarship offer from Texas during the summer of 2015, and he committed soon thereafter. (A Houston team coached by Herman was also attempting to woo Ehlinger at the time).

Ehlinger’s stock rose considerably during his junior year at Westlake High. He led the Chaparrals to the Class 6A, Division I championship game with 3,833 passing yards, 1,419 rushing yards and 71 touchdowns. He was also honored as the state’s top player by the Texas Associated Press Sports Editors.

Rated as the fourth-best dual-threat quarterback in 247Sports’ composite rankings for the Class of 2017, the 6-2, 230-pound Ehlinger enrolled early at Texas. He struggled in April’s Orange and White Game, completing 10 of the 31 passes he threw with UT’s second-team offense. Ehlinger still remained in contention for the starting job and was the offensive MVP of the second scrimmage of Texas’ fall camp.

On Saturday, Ehlinger will take center stage against a San Jose State team that is 1-1. The Spartans rank 28th nationally against the pass (135.0 yards per game) and 112th against the run (255.5).