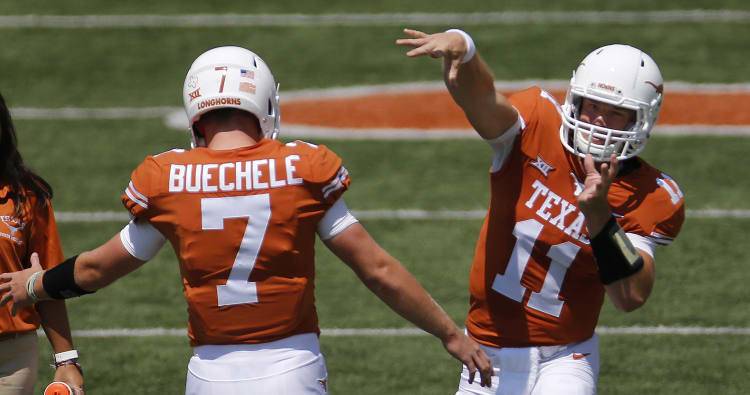 As expected, Shane Buechele was ruled out about an hour before the game because of a bruised shoulder that’s kept him out of practice all week. True freshman Sam Ehlinger, the early enrollee from Westlake, is making his Longhorns debut.

So far, the reviews are fairly positive. Ehlinger looked shaky on his first drive but led Texas to a pair of long scoring drives. Jerrod Heard’s getting his first action at quarterback since 2015. The Longhorns also are leaning on their running game, and Chris Warren III — making the start this week, after playing behind Kyle Porter against Maryland — is looking particularly good. He’s got 95 yards on only seven carries, including a big 41-yard touchdown run in the second quarter.

The Texas defense also showed up today. The Horns held San Jose State to only 20 yards in the Spartans’ first three drives, then stopped them on a fourth-and-1 at the 10 when Malik Jefferson popped quarterback Montel Aaron as he tried to jump over the line.

Ehlinger’s making plays more with his legs than his arm. He’s 8 of 16 for 129 yards and has six runs for 43 yards. He’s extended a couple of plays by dancing around in the backfield. He hasn’t been sacked yet; Buechele was sacked five times last week.

The receivers have been pretty quiet so far; Armanti Foreman has 3 catches for 41 yards, Warren 2 for 23 and Lorenzo Joe and Collin Johnson one catch each, though they’ve gone for 39 and 23 yards.

Keep in mind, though, that this is Texas and that is San Jose State, and the Longhorns are 24-point favorites today.

Still, seeing Texas control a game is a welcome sight for fans who spent the past week scratching their heads over the season-opening stumble against the Terrapins.

The first play of the Sam Ehlinger era was a Warren run up the middle, for 7 yards. The second play was an Ehlinger misfire to Lorenzo Joe. Heard came into the game on third-and-3 and he kept it for 9 yards and a first down. Ehlinger’s first deep shot was a 35-yard pass to Armanti Foreman, who was breaking free over the middle on a post. But it went incomplete. It was a combined incompletion — we’ve seen Foreman make tougher catches, but the pass was a bit behind him and Foreman had to go low for it while on the run.

Ehlinger’s first completion came on Texas’ second drive, a nice 18-yarder to Foreman. The pass was thrown into coverage, but well-placed.

Foreman, not Reggie Hemphill-Mapps, is returning punts today. Hemphill-Mapps ran one back 91 yards for a touchdown against Maryland but is suspended for today’s game. (We found that out in the second quarter). A violation of team rules, is the official explanation.

Lorenzo Joe is getting a lot of snaps in Hemphill-Mapps’ absence.

The best moment of the day was Warren’s hurdle of a Spartans defender on a first-down play in front of the SJSU sideline.

Ehlinger’s best pass came with one minute left in the half, a 29-yarder to Joe, who just barely got his left foot in on his way out of bounds. The play was reviewed and upheld.

San Jose State will get the ball to start the third quarter.

Drive 2: Porter in for Warren. Got to midfield. Punt.

The post So far, so good for Sam Ehlinger’s first start as Texas leads 14-0 appeared first on HookEm.