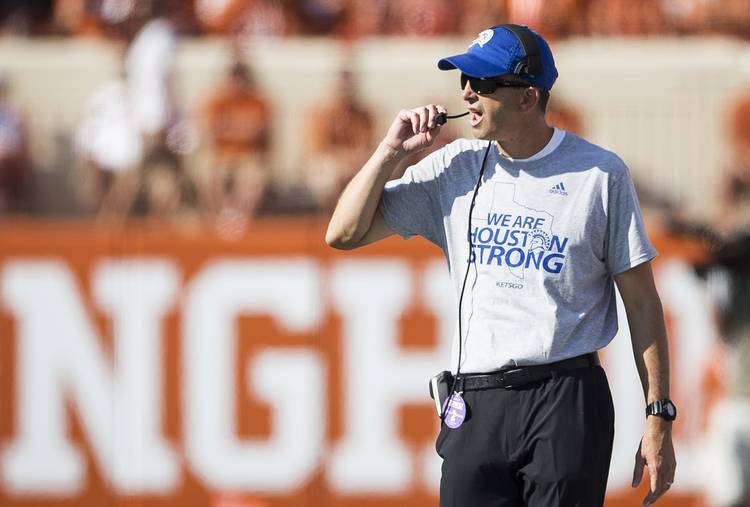 San Jose State head coach Brent Brennan, wearing a "We are Houston strong" shirt, talks into his headset during the second half of an NCAA college football game against Texas in Austin, Texas, on Saturday, September 9, 2017. NICK WAGNER / AMERICAN-STATESMAN

Holton Hill did it again.

The junior cornerback placed an exclamation point on Texas’ 56-0 win over San Jose State on Saturday, the defense’s first shutout since 2014. In the third quarter, Hill picked off a Montel Aaron pass and returned it 45 yards for a touchdown, giving the Longhorns a 35-0 lead. Last week Hill scored on an interception return and blocked field goal return in the loss to Maryland.

With 18 points, Hill is the team’s leading scorer through two games. Last year, only running back D’Onta Foreman, kicker Trent Domingue and quarterback Tyrone Swoopes scored more points than that.

Hill’s second pick-six tied him with five former Longhorns with two interception returns for scores in a season; Earl Thomas (2009), Brandon Foster (2007), Michael Huff (2002, 2003), Greg Brown (2000) and Adam Lowry (1971) have previously accomplished the feat. Of those, only Lowry had produced pick-sixes in consecutive games.

Hill, who also had a pick six against Oklahoma State in 2015, is only one more away from tying Huff’s career mark of four.

Abbreviated appearance: Redshirt freshman Reggie Hemphill-Mapps, a bright spot for Texas in last week’s 51-41 loss, was suspended for the first half. UT said Hemphill-Mapps was punished for a violation of team rules.

He returned in the third quarter and totaled three catches for 47 yards on the afternoon. Against Maryland, he caught seven balls and scored on a 91-yard punt return.

Coming together: Some members of San Jose State’s football team — including head coach Brent Brennan — were spotted on their sidelines wearing “We Are Houston Strong” shirts.

Over the past week, San Jose State sold those shirts for $20 (or two for $30). A school official said that more than 500 shirts were sold online and at last week’s game against Cal Poly. The proceeds will be donated to J.J. Watt’s relief fund. (The football program covered the cost of making the shirts).

The fundraiser was the brainchild of Brennan’s wife, Courtney. The timing seemed appropriate since San Jose State was traveling to Austin and the school’s women’s soccer team had its game last week against Rice cancelled. Ex-Spartans Tyler Ervin and David Quessenberry are also on the Houston Texans’ roster.