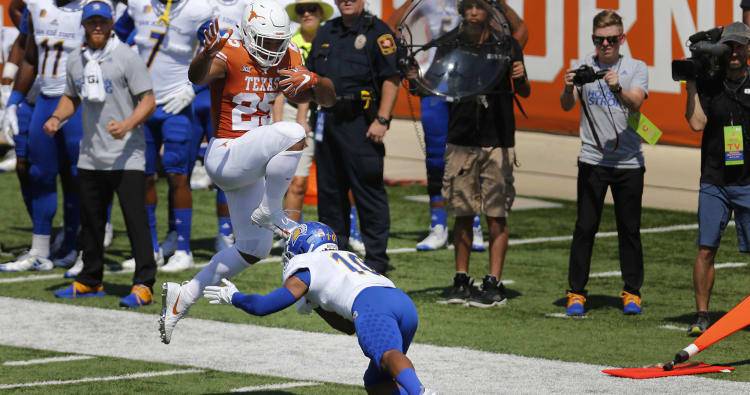 Chris Warren III has no interest in becoming a hurdler.

Warren anchored the Texas offense on Saturday, gaining 166 yards on 16 carries in a 56-0 rout of San Jose State. He also had two receptions, one of which was a 14-yarder in which he hurdled over Spartans safety Maurice McKnight.

Warren bulldozed a path over a few Spartans. It was that first-quarter leap, though, that caught the attention of an announced crowd of 88,117. (The 6-4, 250-pound Warren later attempted another leap through the San Jose State defense).

Warren said afterward that he had once been recruited to do hurdles in high school but refused. He added that he’s no threat to John Burt, the UT receiver who has twice qualified for the NCAA championships in the 110-meter hurdles.

“John’s got the track, he’s got it,” said Warren, a junior whose father was a NFL running back for 11 seasons. “That’s too many hurdles. I only jumped twice today, so I’m going to leave it at that.”

Texas will settle with Warren being a top-flight option in the backfield. On Saturday, he became the 51st player in school history to eclipse the 1,000-yard career mark.

Warren averaged 10.4 yards per carry and was never stopped in the backfield. His longest run was a 41-yard touchdown that saw the Rockwall native take the snap on a third-and-1 play. He broke two tackles near the line of scrimmage and eventually ran over a Spartans defender near the goal line.

For good measure, Warren later carried another Spartan into the end zone on his second touchdown run.

“It was good to see him let loose and just run,” left tackle Connor Williams said. “We made some holes for him but he’s a big back and he’s hard to tackle.”

Warren’s outburst came one week after he recorded only six carries in a 51-41 loss to Maryland. Sophomore running back Kyle Porter was limited to eight touches in the backfield as Texas fell behind early and chose to center its offense around Shane Buechele’s 52 passes.

Williams said the offense’s top goal this week was to establish the run. In addition to Warren, Texas got 72 yards from Porter. Freshman Toneil Carter also picked up 56 yards and his first collegiate touchdown. UT finished the game with 406 rushing yards.

“We need to run the ball,” head coach Tom Herman said. “We have an above-average offensive line. We’ve got good tailbacks. That’s who we are. That’s what we believe in.”

Warren started last year in a timeshare with eventual 2,000-yard rusher D’Onta Foreman, but a knee injury ended his season after four games. This spring, Warren was slowed by a hamstring injury. He also caught the mumps during the summer and suffered a concussion in fall camp.

Warren, though, wasn’t wallowing in self-pity when asked about the past year’s obstacles.

Again, he’s not a hurdler.

“I feel like the injury and sickness and stuff, I feel like that’s just life,” he said. “You’re playing football, you’re going to get hurt. You won’t be injured per se, but you will be hurt eventually at some point. Getting sick, that happens to everybody.”

With Foreman leading the charge, Texas ranked 17th nationally in rushing last year. UT returned four starters to its offensive line and Warren and Porter both had experience in the backfield. The Longhorns averaged 6.9 yards over Saturday’s 59 rushing attempts.

San Jose State (1-2) has allowed 917 rushing yards through three games, so UT will surely see better defenses down the road. (USC, next Saturday’s opponent, ranked 31st against the run last year). Still, the Longhorns liked what they saw on the ground this weekend.

“We definitely think we can dominate the run game if we execute,” Warren said. “If we play hard and we execute, I feel like we can run the ball pretty well. Our O-line did a fantastic job today, and I give all credit to them.”