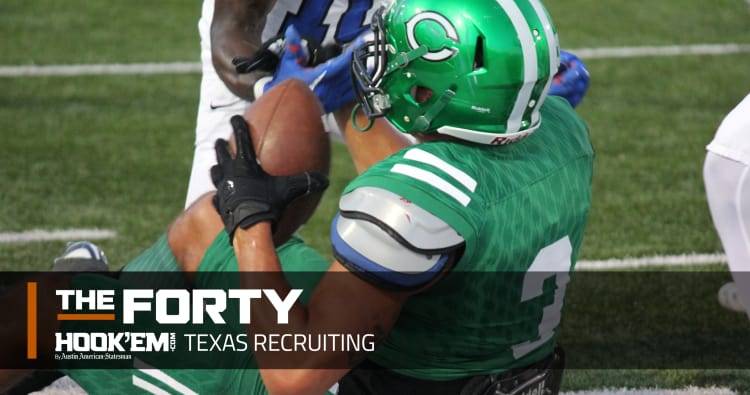 There are a handful of 2019 recruits in the conversation for being the top-rated player in the state. Dallas Bishop Dunne safety Brian Williams currently holds the top spot on the Next 25, a list of the state’s top 25 2019 prospects. But Cuero athlete Jordan Whittington made a claim for consideration Friday night in a 41-13 victory over Yoakum.

In a game featuring two 2018 Fabulous 55 members in Joshua and Jordan Moore, Whittington was clearly the best player on the field. The junior scored five times, rushing for 148 yards and catching five passes for 105 yards.

“The Yoakum game is a rivalry game for us and it is always important, but I’d be lying if I said it didn’t mean more this year because of the hurricane and everything this area faced,” Whittington said after the win. “Football is something that can bring us back together and it felt great being back on the field with my teammates and hearing cheers from our fans.”

The game was standing-room early and was the opener for Cuero after its Week 1 game was cancelled because of the effects of Hurricane Harvey. Four of Whittington’s touchdowns came on the ground, while his lone touchdown reception was a 65-yard catch and run.

“Versatility is one of the traits I want to be known for as a player,” he said. “I can run the ball, catch the ball, help on return teams. My preference is to play wide receiver in college.”

Whittington is set to decide on Oct. 1 — his birthday, and it appears Texas and Texas A&M are in a race to land his commitment. UCLA and Florida also are in the mix. The Longhorns were represented at the game by assistant coaches Corby Meekins and Drew Mehringer.

The Aggies flew in the helicopter to watch the game.

“I already know where I want to go,” Whittington said without offering a hint on which school he’ll pick. “I’ve known for a while, but I wanted to make the decision when the time was right.”

Whittington spent Saturday on an unofficial visit to Texas to watch the Longhorns beat San Jose State. It should be viewed as a good sign for Texas that Whittington took in a game less than three weeks from deciding his college destination.

“I’ve seen everything at Texas in past visits, so my main goal was to watch how the team played in a game and to watch the offense and how I could be used,” he said Sunday via text. “It was a good visit. I liked the wildcat.”

Texas hosted a handful of commitments Saturday alongside numerous targets for 2018 and 2019. Byron Hobbs, an outside linebacker from Fort Worth Eastern Hills, was supposed to be one of those commitments on campus alongside Caden Sterns, Reese Moore, and Jalen Green.

Instead, Hobbs missed the visit after sustaining a neck injury in Eastern Hills’ win over Fort Worth Southwest. The 3-star linebacker was in good spirits Sunday and said he’s expected to miss just one to three weeks before returning to complete his senior season. Hobbs is Texas’ longest-standing commitment in the 2018 class.