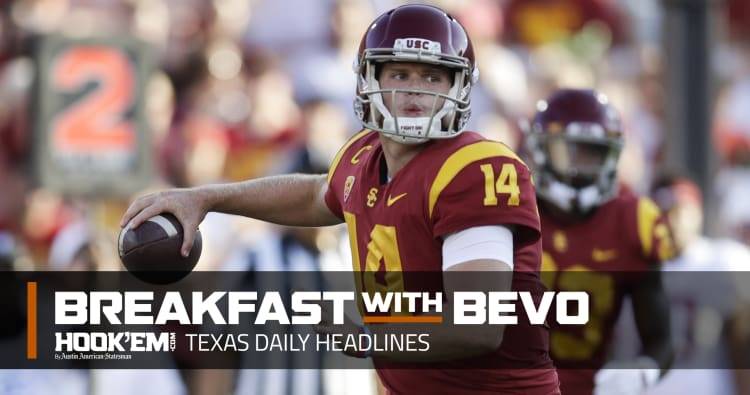 It’s been 12 years since the Trojans and Longhorns squared off for the 2005 national championship in state of California. Texas and Southern California play again for the first since that title game, but stars Vince Young, Matt Leinart and Reggie Bush are long gone, and the game will be a match up of programs on different planes. As Austin American-Statesman’s Brian Davis points out – it’s been 50 years since the Longhorns matched up with USC on the Trojans’ home field. Longhorn athletic director Mike Perrin was a linebacker in that game that featured NFL Hall of Fame running back O.J. Simpson.

5 keys to the Longhorns blanking the Spartans

Texas steamrolled to a 56-0 victory over San Jose State, and the game was well out of hand at the beginning of the fourth quarter. Danny Davis takes a look at what plays during the game were key to the Longhorns win on Saturday.

Is there a quarterback competition at Texas now?

Columnist Kirk Bohls discusses the beginning of the Sam Ehlinger Era at Texas. But how long does it last? One game? Four years? Perhaps it’s just all hands on deck when it comes to whom will be taking snaps this season for the Longhorns.

Columnist Cedric Golden says it was evident that the coaching staff was out to make sure there was no carryover from Texas’ opening home loss. The Longhorns played with belief on Saturday, but can they turn that into conviction?

Our entire game coverage can be read through these stories:

Highlights of the game

We published more than 120 game action photos from Saturday’s win over the Spartans. Check out the entire gallery here.

A day at DKR

One veteran sports writer was let loose Saturday with one assignment: Write about one day in the life of Royal-Memorial Stadium.