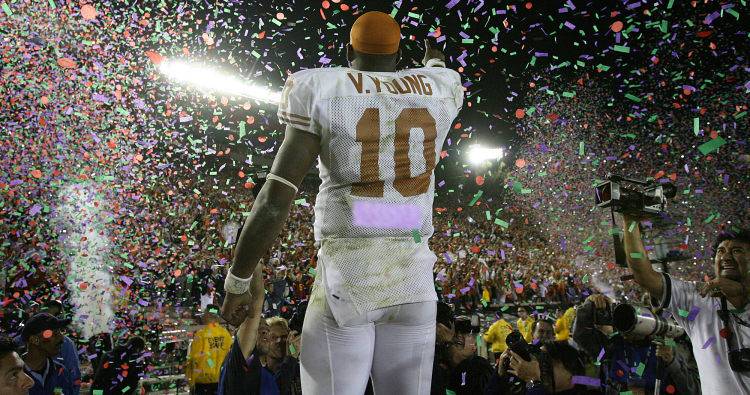 With the Texas Longhorns and USC Trojans set to square off on Saturday, much will obviously be made of their first meeting since arguably the greatest college football game ever — the 2006 Rose Bowl.

As most remember it, the Vince Young-led Longhorns snapped USC’s 34-game win streak to secure a 41-38 victory for the National Championship, but that win doesn’t count if you ask the Trojans:

In case you’re unable to make out what the text says, the first line reads, “USC is 4-0 in its series with Texas (not including 1 loss vacated due to NCAA penalty).”

The penalty USC referred to is from a scandal involving star running back Reggie Bush, who accepted gifts from an agent during his time with the Trojans. The university was punished by seeing the final two wins of its 2004 National Championship season vacated, along with all 12 of USC’s wins in 2005.

Had the Trojans beat the Longhorns on that Jan. 4 night in Pasadena, that win would have been vacated, as well. But as the record books show, the loss wasn’t vacated and Texas’ 41-38 victory over USC still stands.

Maybe the NCAA simply decided Vince Young pouring 467 yards of total offense on USC’s star-studded defense and crushing all hopes of a three-peat was punishment enough.