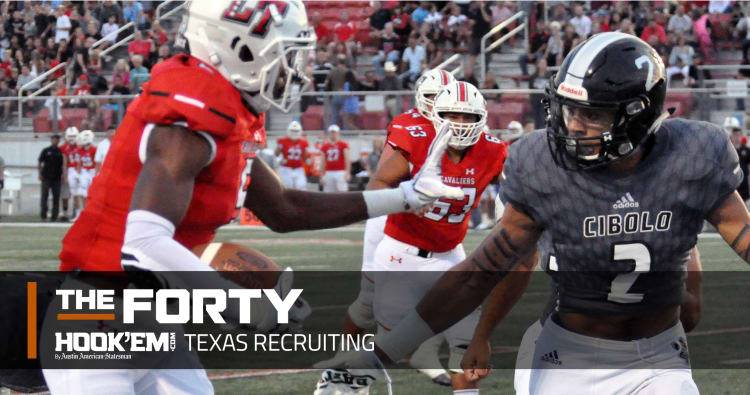 Victories cure most ailments. A week ago, Texas was facing backlash after its opening loss to Maryland at home in front of numerous commitments and recruiting targets. The questions hovered throughout the week.

Is all the momentum lost? Will the No. 2-ranked recruiting class in the nation start to fall apart?

The answer was clearly no. The Maryland loss was one hiccup in a long process. Tom Herman admitted before the season that Texas didn’t possess enough talent on the current roster to compete for championships.

It was a disappointing loss, in recruiting terms. Not a crippling defeat.

Herman earned his first win as Texas’ head coach against San Jose State on Saturday. Another home game allowed the Longhorns to host a few commitments and more than a handful of important recruits in the 2018 and 2019 classes. Unlike last week, those players received a strong show as the Longhorns cruised to a 56-0 victory.

“It was great,” said 4-star safety Caden Sterns of Cibolo Steele, who’s already committed. “It wasn’t much different than a visit for junior day or in the summer, but we got to experience the energy on game day.”

Sterns joined other UT commits like Reese Moore and Jalen Green on campus. Linebacker pledge Byron Hobbs didn’t make his scheduled trip to Austin because of a neck injury suffered Friday night. The 3-star linebacker said in a text message Sunday that he expects to miss one to three weeks. Quarterback commit Casey Thompson also didn’t make it to the game.

“I got to go in the locker room after the game and listen to the post-game talks,” said offensive line commit Reese Moore. “It was really cool.”

Texas knows which prospects will make up a bulk of the 2018 class with 18 commitments. The goal for the Longhorns is now to start building chemistry before the group, which is expected be 22 or 23 players come national signing day, arrives on campus.

“It is important to build chemistry during the recruiting process with the other guys who will join me at Texas,” Moore said. “It makes sure your team is built from the beginning.”

The 2018 class trails only Ohio State in rankings and the Longhorns are still chasing a few top targets, specifically two defensive linemen who outside of the state. The Longhorns also are pursuing 2018 commitments from wide receiver Jaylen Waddle, one more offensive lineman and cornerback teammates D’Shawn Jamison and Anthony Cook.

Excellent weekend in Austin I’ll be back soon #RevolUTion18 #HookEm 🤘

Perkins, a 4-star defensive end, is ranked as the No. 114 player in the country and the No. 4-ranked weakside defensive end for 2018, per 247Sports’ composite. He was selected to compete at The Opening Final and will participate in the U.S. Army All-American Bowl in January.

#HookEm commit DeMarvion Overshown had a heck of a Friday night: fum return 50 yards for a TD, a 60-yard TD run and a 20-yard TD reception.

Does Texas have a decision to make at quarterback?

Vince Young to current Longhorns: ‘Go out there and show the world we’re Texas football’