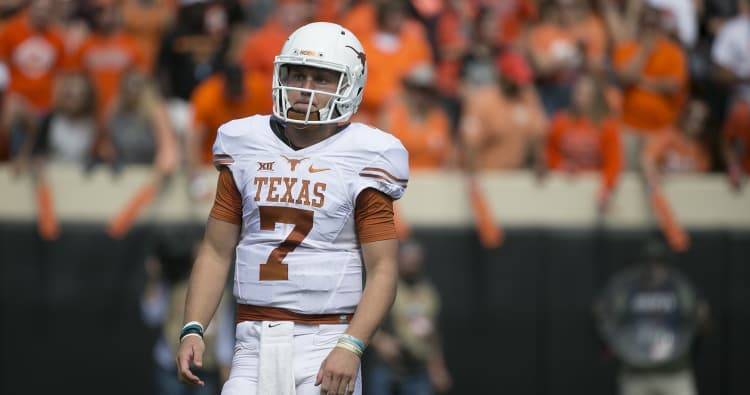 Texas linebacker Malik Jefferson stays off social media, so he’s missed a lot of the internet-based jawboning about the Longhorns’ 1-1 start.

What are people saying about this week’s matchup with fourth-ranked USC?

“That we aren’t good enough. That they’re going to kill us,” he said. “They know that it’s going to be a very competitive game, and we know it as well.”

Multiple Longhorns acknowledged Tuesday that being a two-touchdown underdog isn’t ideal. Texas shouldn’t worry about what oddsmakers say, though. They need to focus on improving a dismal road record away from Royal-Memorial Stadium.

“I guess a lack of focus and not being together in that bunker that coach talks about,” Jefferson said. “It’s going to be very focused in that defensive room every day knowing that we have to be out there setting that tone in the game.”

Buechele practices: Quarterback Shane Buechele had limited throwing work but otherwise went through the entire practice on Tuesday, according to a team spokesman.

“He looked pretty good to me,” running back Chris Warren III said.

Other players demurred when asked about Buechele and his status against the Trojans. Coach Tom Herman has indicated he wants the sophomore to play if possible. Offensive coordinator Tim Beck is scheduled to meet with reporters after Wednesday’s practice.

Nickel back P.J. Locke III said Darnold has the potential to keep plays going and can find an open receiver from either hash mark.

“Basically, he’s a great quarterback all around,” Locke said. “He’s obviously an NFL quarterback, and he’s only a sophomore. I can imagine going through the season how much better he’s going to get. I’m glad we’re catching him now.”

2005 memories: Several Longhorns from the 2005 national title game met with reporters Tuesday afternoon. Vince Young said his message to current players would be to “Go out there and show the world we’re Texas football.”

The current Longhorns were grade schoolers when Young scored on fourth down in the Rose Bowl.

“I was in elementary school,” left tackle Connor Williams said. “I was already in bed because it was bedtime, and I remember my parents screaming from the living room. I went out and watched the highlight of Vince Young running in. It was everything people talked about the next day at school.”

Receiver Collin Johnson grew up in San Jose, Calif., and said, “People would assume that I’m a USC, UCLA or even San Jose State guy. But I just bleed burnt orange.” His father Johnnie was an All-American defensive back at UT who played 10 seasons for the Los Angeles Rams.

“My family was going crazy when Vince Young ran that last play in for the game winner,”Johnson said. “I feel like every time I look up on Longhorn Network that game is playing.”

Sold out: USC officials announced Tuesday that the 92,348-seat Coliseum was sold out for this week’s game. Texas also sold its entire allotment of 5,700 tickets.

One Longhorn that can’t make it is Bevo XV. The team’s mascot will not make the trip due to space constraints along the Coliseum sideline.

Bevo XV can’t travel to Los Angeles, and he’s not happy about it

Longhorns in the NFL: Week 1 highlighted by defense