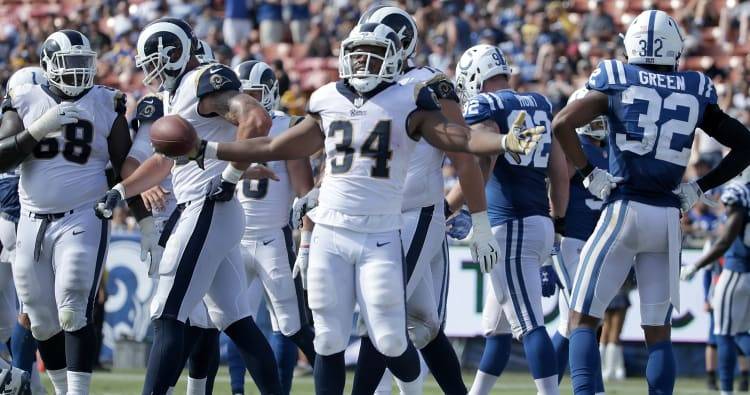 Is there such a thing as a former Longhorn? These players will always be Longhorns to University of Texas fans, even though they’ve graduated to the next level of football. Every week we’ll update you on how they performed the previous weekend. Here’s a look at the Longhorns in the NFL and how they fared in Week 1.

Earl Thomas made his return to action after sustaining a broken leg last year. He faced Green Bay at Lambeau Field and the Seahawks came up short, 17-9. Thomas proved he was back and as good as ever, though, leading the team with 11 tackles. He also had a pass defended and had an interception taken away because of a penalty.

Jordan Hicks is becoming a defensive force for the Eagles. He led the team with five interceptions last season and opened his 2017 campaign with a fumble recovery. He was second on the team in tackles with seven in the Eagles’ 30-17 win over the Redskins. Hicks added a half-tackle for loss as well. He has 12 total takeaways in his two years, plus one game.

Malcolm Brown and the Rams put a whoopin’ on the Indianapolis Colts, defeating the short-handed squad 46-9 Sunday. Brown had seven carries for 16 yards, but he got in the end zone.

Adrian Phillips made just one tackle, but his biggest play came on a fourth-quarter interception that gave the Chargers new life. The Chargers were able to cash in on the takeaway but eventually fell 24-21.

Off the WR.
And the DB’s foot…

And @Phillips_17 with the PICK!!! #Chargers pic.twitter.com/OvhGdrCyJI

Derrick Johnson, LB, Chiefs—His Chiefs made a statement on Thursday, defeating the Patriots 42-27. Johnson had eight tackles, two for a loss and defended a pass in the win.

Jamaal Charles, RB, Broncos—He made his debut with the Broncos in the last game of the week, but his 40 yards rushing were overshadowed by a late fumble.

Malcom Brown, DT, Patriots—Brown was second on the team in tackles with six in the surprising 42-27 loss to the Chiefs.

Sam Acho, LB, Bears—Acho and the Bears fell 23-17 to the NFC Champion Falcons. Acho had three tackles in the loss.

Justin Tucker, K, Ravens—Tucker was perfect in the 20-0 win over the Bengals, connecting on two field goals and two extra points.

Roy Miller, DT, Chiefs—Miller made his regular season debut with his new team and made two tackles.

Brian Robison, DE, Vikings—Robison didn’t register a stat in Monday night’s big win over the Saints, but he made sure to contribute to a good cause.

I’ll be wearing theses tonight for pregame and will auction these off soon to help with Hurricane Harvey relief. #nfl #mondaynightfootball #minnesota #texas #vikings #reeleminfoundation

Trey Hopkins, OG, Bengals—The former Longhorn and the Bengals had a day to forget as the offense was shut out. Add to that, he suffered a knee injury that kept him out of Tuesday’s practice.

Phil Dawson, K, Cardinals—He had a tough debut with his new team, connecting on 1 of 2 field goals. He missed a 32-yard field goal.

D’Onta Foreman, RB, Texans—The rookie made his NFL debut but didn’t get much action, carrying the ball once for four yards in the 29-7 loss to the Jaguars.

Brian Orakpo, LB, Titans—Orakpo had one tackle and defended a pass in the 26-16 loss to the Raiders.

Colt McCoy, QB, Redskins—McCoy didn’t get into the game as the Redskins lost 30-17 to the Eagles.

Hassan Ridgeway, DT, Colts—The defensive tackle was part of an effort that held the Rams to 1.9 yards per carry. That didn’t matter much as the pass defense wasn’t very good.

Marquise Goodwin, WR, 49ers—Goodwin didn’t break out like he had been during the preseason. He did have three catches for 21 yards, however.

Kenny Vaccaro, S, Saints—Vaccaro and the Saints got torched by Sam Bradford and the Vikings all night on Monday. Vaccaro had six tackles in the 29-19 loss and was flagged for a personal foul.

Alex Okafor, DE, Saints—Okafor made six tackles, including two tackles for loss in his debut for the Saints.

Fozzy Whittaker, RB, Panthers—Whittaker has been brushed to the side with the presence of Christian McCaffrey as a pass catcher and special teams returner.

Keenan Robinson, LB, Giants—The linebacker didn’t play in the season-opening loss to the Cowboys due to a concussion suffered on Aug. 3.

The post Longhorns in the NFL: Week 1 highlighted by defense appeared first on HookEm.