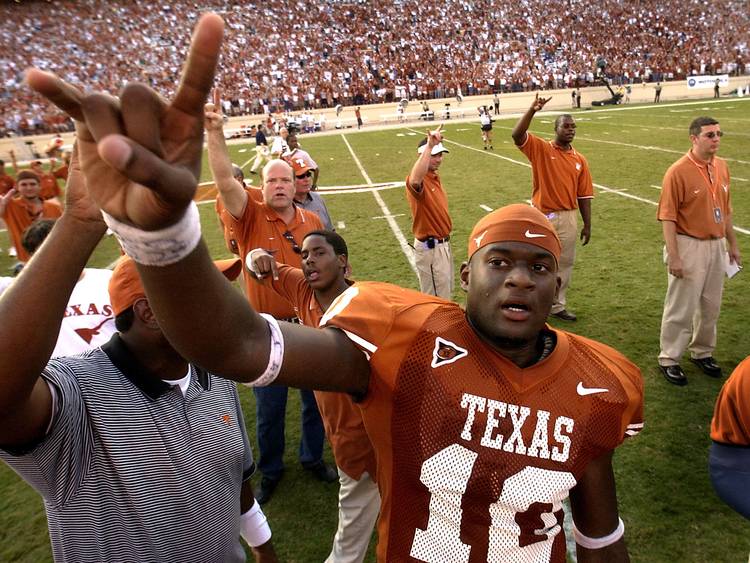 Twelve years removed from the greatest sports moment of his life, Vince Young still carries himself like Superman, ready to take on the world and the USC Trojans.

Asked Tuesday why UT has fallen off in recent years, Young said, “Be careful, man. I’ll dive on you, bro, if you talk about my university like that.”

Young and several others members from the 2005 national championship team met with reporters Tuesday on the ninth floor of Bellmont Hall. It was a true turn-back-the-clock moment.

Young had the strongest message for the current Longhorns (1-1) heading into this week’s game against fourth-ranked USC (2-0). Only those inside the locker room now can change the program’s fortunes.

“You gotta go earn that type of stuff. You can’t just come to Texas because its Texas and think that your’e just going to win ballgames. Everybody is going to give you their best when they play Texas.

Several players joked about the number of times they’ve seen the 2005 Texas-USC replay on Longhorn Network. “Until something tops it, they’re going to keep playing it,” said Kasey Studdard, an offensive lineman that season.

“We’ve put the new sod down. it’s time to put the water on the grass and let it grow,” Crowder said. “That’s basically where they’re at right now. It’s going to take ups and downs, and you’ve got to understand that, but they’ve just got to stay the course.

“Don’t start pointing fingers and saying stuff behind each other’s backs,” he added. “Just stay the course and let everything work itself out. Just go one practice, one day at a time and the games will be a lot easier.”

The post Vince Young to current Longhorns: ‘Go out there and show the world we’re Texas football’ appeared first on HookEm.

Bevo XV can’t travel to Los Angeles, and he’s not happy about it