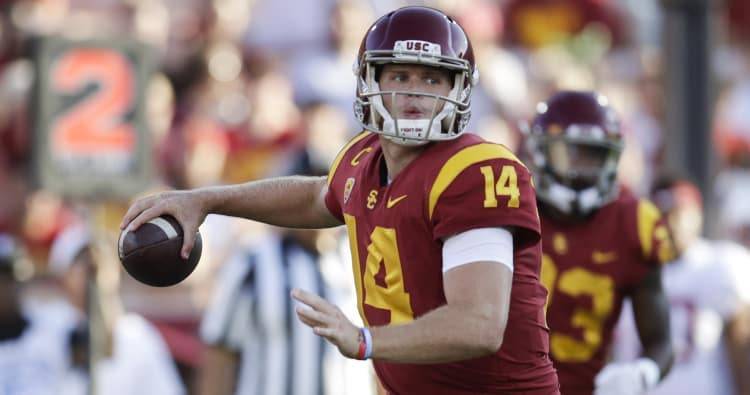 Sam Darnold has been as good as advertised so far in 2017.

The USC quarterback has completed nearly 75 percent of his passes for 605 yards and 4 touchdowns, and in Week 2 completely picked apart Stanford in a 42-24 beatdown.

RELATED: Vince Young: ‘Go out there and show the world we’re Texas football’

Heading into another prime-time game Saturday against Texas, it is understandable for Longhorns fans to be genuinely terrified of what Darnold might do.

Watching highlights of USC’s first two games will do little to abate those fears, but there is one stat worth delving into. Super-Sam has thrown as many interceptions as he has touchdowns. Four to be exact, two each against Western Michigan and Stanford.

Let’s take a look at those plays

On 2nd-and-15 from his own 48, Darnold tries to fit a pass over the middle that is tipped by Broncos linebacker Asantay Brown. The ball floats in the air and is tracked down by cornerback Darius Phillips.

As you’ll see, this one is an outlier because it happens on a throw toward the middle of the field, relatively close to the line of scrimmage. It’s late in the half, and in an effort to make something happen Darnold tries to squeeze a pass through a window he probably shouldn’t. (This play happens at the 2:40 mark in the video above.)

On the first Trojans drive of the second half — and their first since the previous interception — Darnold makes another mistake. Trailing 21-14, he decides to take a shot down field on first down from the Broncos 38-yard line (3:07 above).

He’s not under a ton of pressure, but you can still see him leaning backward as he lets the ball go. It ends up being slightly under-thrown, and defensive back Samuel Beal makes a great play on the ball to steal it away from Jalen Green.

Darnold completed his first 11 passes as USC scored on its opening three possessions against the Cardinal. His 13th throw of the day got picked off (12:17 in the video).

Under heavy pressure, he makes a late decision to throw deep for his top receiver, Deontay Burnett. Again, he ends up leaning backward and slightly under-throwing the pass. Strong safety Justin Reid sees the play the whole way and makes a great leaping grab. If he doesn’t, it’s very likely the ball ends up finding Burnett for an incredible third-down conversion.

Again, the Trojans’ first drive of the second half ends in a Darnold pick. On 2nd-and-8 from the Cardinal 32, he gets a little greedy (17:50 above).

Darnold sees Tyler Petite well-covered, but decides to bet on his 6-4 tight end to win the one-on-one battle. What he doesn’t see is cornerback Alijah Holder, who will probably tell his grandchildren about the time he out-smarted Darnold at the Coliseum.

If Holder doesn’t leave his man and track back 25 yards, Darnold drops the ball into Petite’s hands for a touchdown.

What did we learn?

Darnold’s confidence gets him into trouble sometimes, especially when is a.) under duress or b.) throwing across his body at least 30 yards down field. The problem is, for each of these interceptions there are at least four plays where Darnold pulls off the spectacular throw for a big gain.

Also, each of these picks required a defender making a great read AND an athletic play on the ball. Not only does Darnold trust his arm, but it’s clear he trusts his receivers to win one-on-one battles.

How can Texas exploit Darnold’s confidence?

Before we answer this question, we have to address the elephant in the room. A confident Darnold is going to exploit the Texas defense. The first step for the Longhorns has to be mentally accepting that the quarterback on the other team is going to make some indefensible throws.

The teams that pick off Darnold are the ones that keep playing hard and fundamentally sound, even after they’ve been burned. Against Maryland, Texas allowed its mistakes to compound on one another and it gave up 482 yards and 51 points.

If the Longhorns manage to intercept Darnold, especially if it happens when they’re behind, it will mean that they’ve grown mentally as a team.

The post Analyzing Sam Darnold’s 4 interceptions and whether ‘Hollywood’ could strike again appeared first on HookEm.

Texas fan Lance Armstrong to USC: ‘You lost the game fair and square.’