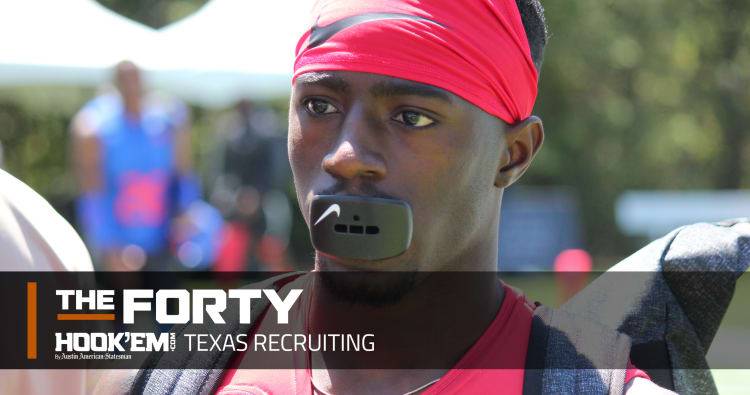 Texas is closing in on a complete 2018 recruiting class. The Longhorns hold 18 commitments and the group ranks as the No. 2 recruiting class in the nation. Tom Herman’s program wants to end national signing day with 22 or 23 signatures from top-flight recruits. That means a few positions are still up for grabs and a couple of those spots could be filled by the end of October.

Texas’ lone commitment in the 2019 class is quarterback Roschon Johnson of Port Neches-Grove. The Longhorns hope Whittington, a 5-star wide receiver from Cuero High School, becomes commitment No. 2 in the class. The 6-foot-1, 198-pound athlete is ranked No. 5 in the Next 25 and made a strong case to become the state’s top player in the 2019 class with a five-touchdown performance in a season-opening victory over rival Yoakum.

Whittington turned in his performance in front of assistant coaches from Texas and Texas A&M. He’s indicated his decision on Oct. 1 will come down to Texas, Texas A&M, Florida and UCLA. Most consider it a battle between the Longhorns and the Aggies.

Every home game matters, and not just in the win column. A home game allows the Longhorns an opportunity to host current commits and potential targets. Texas took advantage of that in the first two weeks, hosting more than 30 recruits against Maryland and San Jose State. The next opportunity for the Longhorns to host the top talent in the upcoming recruiting classes comes against Kansas State on Oct. 7 since Texas will face USC this weekend on the road before an open week awaits on the schedule.

The Longhorns want at least one more cornerback in the 2018 class and Jamison, a 4-star cornerback from Houston Lamar, is a likely candidate. Jamison has been considered a Texas lean for some time, with TCU the main threat to gaining his services. Jamison is a Fabulous 55 member and teammate of current Longhorn commit, wide receiver Al’vonte Woodard.

Cook is considered one of the top players in the state and is ranked as one of the top cornerbacks in the country. He’s also teammates of Woodard and Jamison, which should only help Texas’ chances in late October when Cook decides if Jamison joins Woodard as a future Longhorn. Ohio State is a real threat to the Longhorns for Cook, and the Buckeyes should be considered the current favorite to land the 5-star cornerback.