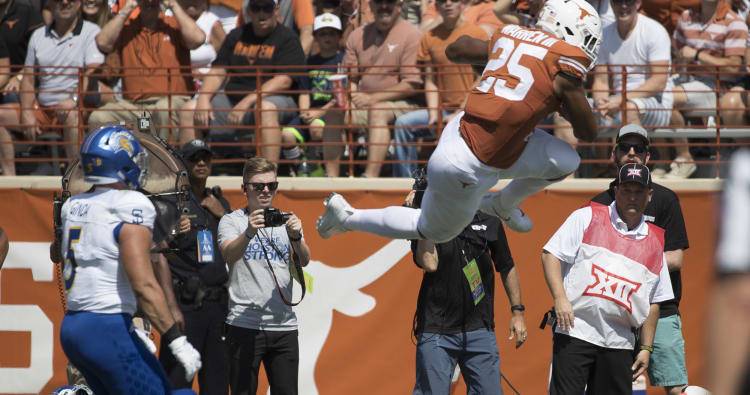 Mistakes happen in recruiting, but every perceived slight can be used as motivation. Just ask USC running back Ronald Jones II.

Jones grew up a Texas fan but the feeling wasn’t necessarily mutual. He ran for 2,009 yards as a senior at McKinney North and scored 28 touchdowns. But when the recruiting letter came from Austin, it was addressed to “Roland.”

So it made sense that UT players would feel disrespected when Jones scored last Saturday against Stanford and appeared to flash the upside-down “Hook ’em” hand sign.

“It’s for dirty, dirty Dallas,” Jones said Tuesday, according to the Orange County Register. “I would never try to diss my own state. All I talk about is Whataburger.”

In retrospect, Texas got the running back that the coaching staff wanted all along in 2015 — Rockwall’s Chris Warren III, the Longhorns’ 250-pounder who was last seen hurdling some woebegone San Jose State defender on his way to crossing the 1,000-yard mark for his career.

Roman numerals and defenders get left everywhere with these two.

“As you saw on Saturday, he’s shown a couple of talents that he has, which is his vertical jump,” UT left guard Patrick Vahe said of Warren. “Man, we kind of played it in slow motion.”

Jones and Warren, both juniors, will put their talents on display Saturday in the Los Angeles Coliseum in one of most intriguing aspects about the entire Texas-USC matchup. Both teams want to establish the running game and showcase their power along the line of scrimmage.

Jones has piled up 2,344 career yards and ranks 13th on USC’s career rushing list. He’s posted seven career 100-yard games. He had 223 yards against Cal last season, the most by a Trojan since 2010 and the second-most ever by a sophomore.

Warren has 1,033 career yards. His sophomore season was cut short by a knee injury suffered in the fourth game against Oklahoma State. With Warren sidelined, D’Onta Foreman wound up with more opportunities, rushed for 2,028 yards and won the Doak Walker Award.

There’s no way Foreman gets that many carries and that many yards had Warren stayed healthy. But we’ll never know for sure. “We won’t,” Warren said. “Maybe that’s what he needed to show everybody that can play like that.”

Foreman is now with the Houston Texans. Warren is now the featured back with the Longhorns. But can he stay healthy? That’s been the lingering question that’s dogged him during his time in burnt orange. This summer, he contracted the mumps and had a hamstring issue during training camp.

There’s no question Warren has straight-ahead power. He simply ran straight through Texas Tech’s defense as a freshman and finished with a career-high 276 yards on 25 carries. He’s got tremendous body lean through holes and is simply tough to tackle.

But that size is a burden at times, too. Warren hasn’t shown true elusiveness in tight spaces.

“Yeah, I feel really healthy,” Warren said. “I feel able to go out there and run and do what I do. Just waiting for game day now. It’s all in the preparation.”

Texas coach Tom Herman said the offensive staff has worked with Warren to lower his pads. “I mean, this was a kid that had a bulls-eye on his chest because he ran so upright,” Herman said. “You know, he took a lot of pounding because of it.”

Herman said Warren still has things to work on, like his vision and when to get through running lanes. “But from an effort and pad level standpoint, was really, really pleased with the game that he had,” Herman said.

If Warren gets better this season, then the same holds true for UT’s offensive line. The week of the opener, Herman said the unit “had the potential” to be as good as Ohio State’s bunch that won the 2014 national title. Then after the San Jose State game, he said the offensive line was “above average.”

“We have to make sure that we go out here focused and ready to play,” Williams said. “That’s one of the huge things that will help us take that step forward to a great team.”

Texas abandoned the running game against Maryland. Herman made it clear he wants the Longhorns to be a physical team up front, and the Horns had 406 rushing yards against San Jose State.

USC had 232 rushing yards against Western Michigan and 310 against Stanford. Jones will be ready, so will Warren. Two North Texas kids battling it out in LA.