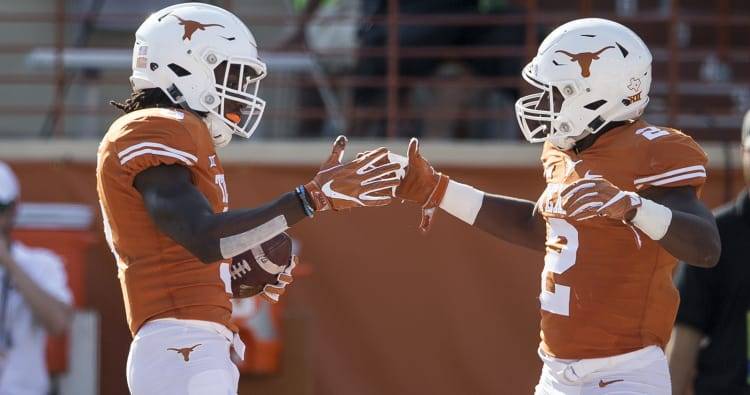 Texas fans can dismiss the importance of a 56-0 win over San Jose State — and many of you certainly have — but it felt like a huge step in the right direction.

Think about it. The Longhorns could easily have fiddled around and beaten the Spartans 38-10 or 40-17. Nobody would have blinked. But they played hard for all 60 minutes and threw down an impressive rout. For a coaching staff looking for positives, that constitutes a big one.

“They want to keep getting better,” UT coach Tom Herman said. “They like the feeling of improvement, and I think they’re proud, too. But they also know that we’ve got to go into a hostile environment to play one of the best teams in the country that’s playing really, really well right now.”

These players swear this team is different. It’s not the same team that suffered through some damaging psychological losses the last few years, they say.

So yes, it’s easy to dismiss the San Jose State win. But now comes the real measuring stick, fourth-ranked USC. It’s impossible to be dismissive of this week’s outcome. A win or loss will shape the narrative for the rest of the season.

Q. It’s early. But really, San Jose State was nobody. Herman will lose five games this year. Been a Horns fan since ’67. I started selling Cokes in the stands. Knew Darrell Royal very well back then. Recruiting was different. We had all the blue chip players on the bench. Now they’re all headed everywhere but Texas.

Serious question: Would Herman take 7-5 right now? Texas has yet to face Sam Darnold, Baker Mayfield and Mason Rudolph, all three excellent quarterbacks. And the Longhorns have to travel to Iowa State and West Virginia. So I’m asking right now if he would take 7-5. Would fans take 7-5 right now? My gut feeling is that Herman wouldn’t but fans would.

Prior to the season, we thought if you offered Herman 9-3 he would probably turn it down. He wouldn’t want to put a ceiling on this group, or so we thought. Mapping out the wins and losses are always fun parlor games, but let’s circle back to this topic after Oklahoma.

We got inundated with responses about Monday’s quarterback story asking who should start against USC — Shane Buechele, Sam Ehlinger or maybe even Jerrod Heard? As Herman would say, let ’er rip …

Q. The University of Texas is not Austin Westlake, so please stop peddling fake news. There is absolutely no doubt that Shane is the starter.

Q. The best QB for Herman’s style of play, which is an option offense, is Heard! The Longhorns are a smash mouth team, which is the opposite of Herman’s coaching style, with game breakers on the edges. That requires an accurate QB! Herman is duplicating Strong’s style of play and disguising it as his own! Buechele should be the starter.

Q. Anyone could have seen this coming. I said as much to Kirk Bohls and Cedric Golden a month ago. It’s not Simms V Applewhite but it will play out all season.

I’m no fortune teller, but I’m afraid Jim might be onto something. This Buechele vs. Ehlinger thing could be a thing all season long. Realistically, it should be Buechele. He’s the one with 13 games under his belt and more than 3,000 passing yards. Yes, Ehlinger did play well against San Jose State but it wasn’t perfect. The Spartans dropped two sure-fire interceptions, and Ehlinger admitted he missed on some other throws.

This is still Buechele’s job to lose. Of course, if he’s not healthy enough to play at a high level against USC, then you must start Ehlinger against USC. I still contend that if Buechele’s throwing shoulder isn’t fully ready to go this week, give him another week of rest. Nine conference games are far more important than a non-conference matchup, even one against No. 4 USC.

Q. It must still be excruciatingly painful for USC to think of that staggering loss to the Longhorns, giving the Longhorns the championship. I know, for me, that I still get goose bumps every time I re-live that incredibly wonderful win in my mind! Hook ’em!

Has anyone not seen the replay of the 2005 national title game on Longhorn Network? If you haven’t, just plop down in front of LHN this week. At some point, it’ll be on again. And again. I did a look back at UT’s 41-38 victory during the 10th anniversary season in 2015. Expect to see some other Statesman writers referencing that game later on this week.

Of course, USC doesn’t recognize that loss to Texas in their official game notes.

Q. Bahahahaha. After the way everyone ignored Texas and gushed over USC like them beating us was a sure thing, I am not surprised.

It’s true. According to the USC game notes, USC is 4-0 in its all-time meetings with Texas. In parenthesis it states “not including one loss vacated due to NCAA penalty; original record, 4-1.” The four wins came during the 1950s and ’60s. But I wasn’t aware you could vacate losses when the NCAA slaps you with penalties. Long after that magical night in Pasadena, USC was put on NCAA probation and Reggie Bush ultimately returned his Heisman Trophy.

To be fair, this email was sent to me several days after the Maryland game. But I included it in the mailbag this week because it made me laugh and Texas actually did attack the middle of the field against San Jose State. I nearly fell out of my chair. That was a legitimate no-fly zone the last several years. To see Ehlinger come out and attack the middle by looking for Armanti Foreman was a breath of fresh air. Here’s hoping we see more of that.

Q. The fan base only understands victory, God bless them. However the base takes their cues from leadership, and so if at all possible, they’re must never be daylight between leadership and coaching like there was with Charlie Strong, respectfully.

After the San Jose State game, I had the chance to talk with men’s athletic director Mike Perrin, who played against USC and O.J. Simpson in 1967. He looked relaxed as one might expect after a 56-0 rout. “Last week (against Maryland) was a disappointment,” Perrin said. “But that was then, this is now.” Perrin said that he speaks with Herman frequently about a variety of topics, and as of right now everybody’s on the same page. This is nothing like the Steve Patterson-Charlie Strong days where the athletic director was telling the coach no. Of all the things you can worry about, misalignment among the coach and AD is not one of them.

Q. Devout Longhorn fan now living in the land of Buckeyes. Miss Austin and Texas but the money in Ohio came calling. Peewee Herman — yes, that is his nickname in these parts — is a laughingstock among the many football devotees in Ohio. Way too full of self. I really hope this was a one-time anomaly. What happened to win the games you are supposed to win? To not watch last year’s film is an amateur mistake. You may have a team loaded with “star” talent but you have very few that actually relish the physicality of the game. Film would have told you that.

— Robert from Dayton, Ohio, via email

This is the one area I still don’t understand and probably never will. Herman made it clear to everyone that he did not watch film of last year’s 5-7 team prior to this season. I asked him once, “Not even Kansas?!” Nope, he said. What good would it do? OK, so the past is the past. But I’d want to see who quits and who doesn’t. Who keeps playing hard long through the whistle and long after victory is lost? I wonder if Herman had watched film of last year’s tape, would he have been so high on this year’s team during the preseason? We will never know. Herman’s got plenty of tape to look at now. Win or lose against USC, I’ll be curious to see what kind of changes this coaching staff makes heading into the Iowa State game.

Got a question for the Whys of Texas mailbag? Contact Brian Davis at bdavis@statesman.com.