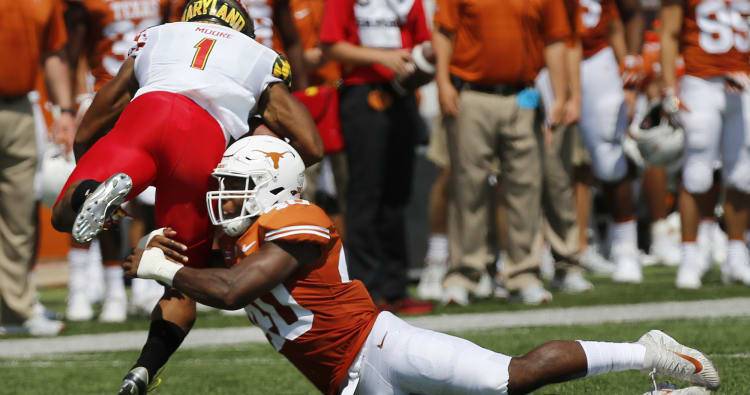 Orlando didn’t hold back when asked about the numbers after Wednesday’s practice.

“No, it’s little bit disappointing my opinion. It’s been addressed,” Orlando said. “Tackles for loss has been down, too. In this package, it should be a lot higher than what it is. It’s not like we’re sitting there playing base stuff. We’re trying to move guys around and do that stuff. It’s been addressed, and it’s gotta pickup.”

Orlando did not make any wholesale personnel changes after the season-opening loss to Maryland. The Longhorns simply went back to work and notched a 56-0 rout over San Jose State. But now comes fourth-ranked USC, led by dynamic quarterback Sam Darnold.

Orlando did play junior transfer Gary Johnson more alongside Malik Jefferson against the Spartans. He also had rush linebacker Breckyn Hager coming out of a three-point stance late in the game. That gave the unit more speed.

It still comes down to getting a push up front. Linebacker Naashon Hughes has 9.5 sacks in 39 career games. Defensive tackle Poona Ford has 12.5 tackles for loss in 35 career games. Both are team captains.

“I don’t want to sit here and panic off of it,” Orlando said. “But when I look at those numbers an know what this package is about, in my opinion, we have to pick that up to make this package work.”

As for Sam Ehlinger, Beck had high praise for the freshman after his first career game against San Jose State.

“Mostly positive,” Beck said. “He went in as a first-year guy, I thought he was gritty, like I thought he would be. I think he missed some throws that we needed to make. He probably could’ve had a really big day if he made those. That would probably be the only real negative about him.”