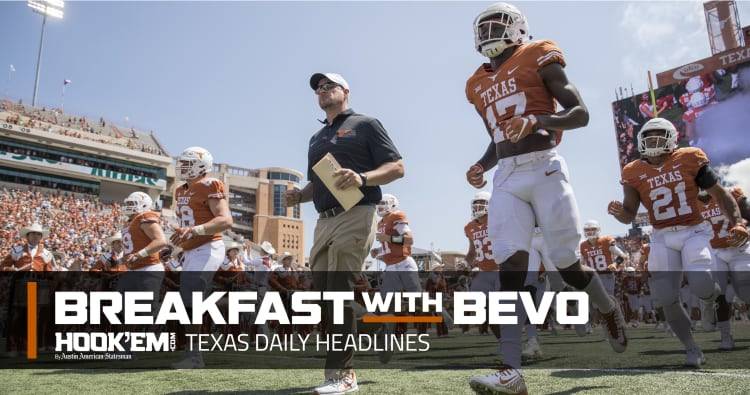 Vince Young and several members of Texas’ 2005 national championship team talked with reporters on Tuesday. He shared his message to current Longhorns. “Go out there and show the world we’re Texas football,” he said. Kasey Studdard and Tim Crowder were among the former Longhorns speaking with reporters.

The Longhorns have a big test coming up this weekend. A matchup with No. 4 Southern Cal can either emphasize how much they struggle on the road, or it can show that they are on the right track. Texas is a big underdog in Saturday’s game and they’re 2-8 in true road games over the last two seasons.

A few Longhorns recruits were in attendance when Texas shut out San Jose State 56-0, making for a nice show for the visiting talent. Recruiting writer Mike Craven keeps you updated on the visits last weekend and all recruiting news on The Forty.

Take a look at a transcription of Tom Herman’s press conference which was annotated by Rich Tijerina. It’s got every question and every full answer in addition to our own staff thoughts on what he said. Kirk Bohls, Cedric Golden, Brian Davis and others cover Herman’s comments.

No L.A. trip for Bevo

Bevo XV won’t be seeing the L.A. sights this season. Space issues are keeping the Longhorn from attending the Texas game against the Trojans at the L.A. Coliseum.

Due to space constraints at the coliseum, I won’t be able to make the trip to Los Angeles for the game. Y’all bring me back a W! #hookem pic.twitter.com/prDDLrtesZ

The Big 12 honored Katie Glenn as the offensive player of the week on Tuesday. Glenn scored twice last week to earn the honor. Glenn is the first Longhorns player to win the Big 12’s weekly offensive award since Alexa Adams in 2015.

Texas was represented well in Week 1 of NFL action. For the most part, the Longhorns in the NFL played great defense and a former running back even scored.

Longhorns in the NFL: Week 1 highlighted by defense

Texas fan Lance Armstrong to USC: ‘You lost the game fair and square.’