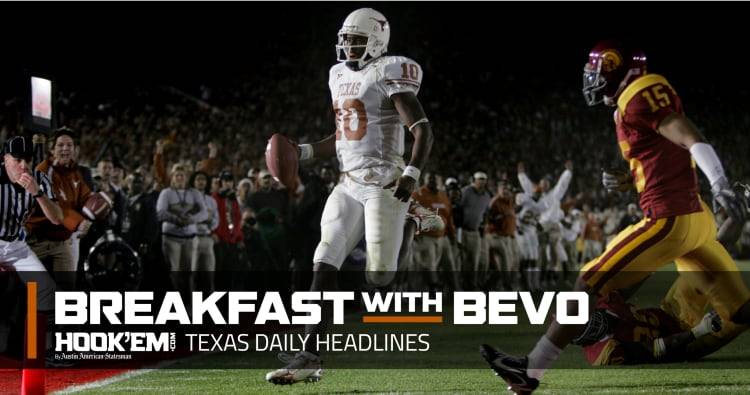 Columnist Kirk Bohls wonders what would be different had Vince Young not crossed the goal line with less than a minute to play in the 2006 Rose Bowl. What would Mack Brown’s legacy be? Would Young have returned to UT a season later? Bohls plays a game of what-if in his column.

The Longhorns volleyball team improved to 7-2 after its 74th win in 97 matches against the Aggies on Wednesday night in College Station. Micaya White led the Longhorns with 10 kills while Lexi Sun and Chiaka Ogbogu each added 7 in the win.

Defensive coordinator Todd Orlando recognizes the need for more pressure on the quarterback. The Longhorns have just 2 sacks in the first two games of the season. They’ll need to do better if they want to slow the Trojans and Heisman candidate Sam Darnold.

A running back showdown in L.A.

Ronald Jones II had been a fan of Texas growing up, but a recruiting faux pas might have helped land him in Southern California. The Trojans host Texas and one thing to watch will be the performances of both teams’ running backs. Chris Warren III and Jones each had highlight hurdles on the way to wins last weekend.

As the Longhorns near a complete 2018 class, Texas fans will want to mark Oct. 14 on their calendars. D’Shawn Jamison, a 4-star cornerback from Houston Lamar, will commit that day. Texas hopes to land another corner for their 2018 class. Recruiting writer Mike Craven publishes The Forty Monday through Friday with the latest recruiting news.

The whys of Texas

Texas football beat writer Brian Davis takes another look into the mailbag to see what’s on the mind of Texas fans (and non-fans, probably). Some wondered who Texas will start at quarterback Saturday at USC. Others weighed in on Southern California’s apparent refusal to recognize Texas’ win in the 2006 Rose Bowl.