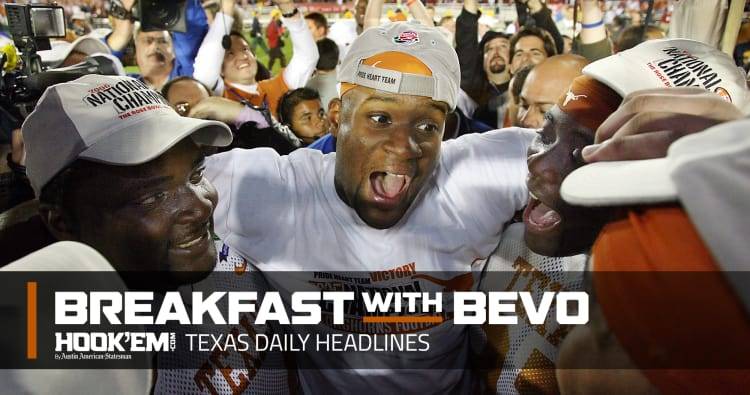 Columnists Kirk Bohls and Cedric Golden revisit the 2005 national title game as the Longhorns are set to face the USC Trojans in California for the first time since that classic. Vince Young and teammates share some memories in the episode this week of On Second Thought.

The Texas-USC matchup in the 2005 national title game was loaded with talent. As columnist Cedric Golden says, “Those were the days. These are not.” Southern California has a clear edge in NFL-ready talent and it will likely show up on Saturday.

Longhorns beat writer Brian Davis talks about the Texas trip to California to take on the USC Trojans. What would a Texas victory mean for the young Tom Herman era? What do the Longhorns have to do to get that win? Very likely play perfect football.

In this edition of Sound Off, Brian Davis and Danny Davis talk about who will start at QB for Texas, among other things. What will the running game produce? What constitutes a victory for Texas as a heavy underdog?

Kevin Lyttle gives all the reasons why USC will easily handle the Longhorns but gives Texas a shot at covering the spread. Check out his other picks for this week.

The Texas volleyball team gets a lift from Ebony Nwanebu in College Station and UT soccer preps for Big 12 play in Danny Davis’ sports notebook. The soccer team hosts UT-Rio Grande Valley on Friday at 7 p.m.

Recruiting writer Mike Craven helps you track Longhorns recruits as they play under the Friday night lights. Some athletes are just happy to be back to playing football after Hurricane Harvey took its toll. All of the 2018 class plays this weekend.

The post Columnists look back on, and forward to, Longhorns-Trojans matchup appeared first on Hook ‘Em.