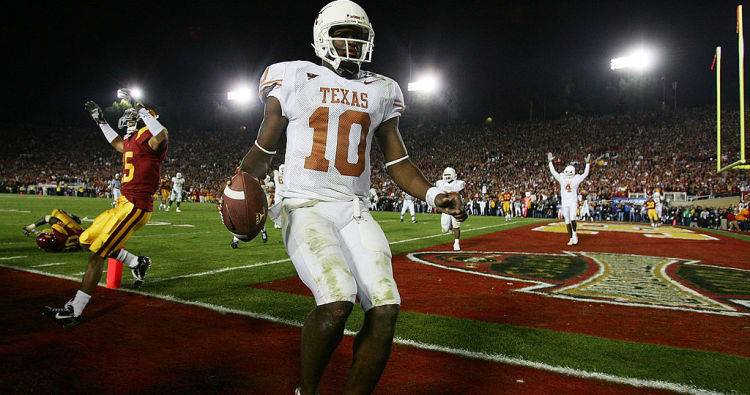 Nearly 12 years later, most would still agree on one widely popular opinion — the 2006 Rose Bowl National Championship between Texas and USC was one of, if not the greatest college football game ever played.

Such an opinion isn’t shared by L.A. Times Columnist Bill Plaschke, though, who detailed his thoughts on why Texas’ 41-38 victory to end USC’s 34-game winning streak “wasn’t all that great.”

“It’s interesting that so many people claim the last time USC and Texas played football it was one of the greatest college games ever,” Plaschke said.

“Standing on the sidelines in Pasadena that night as Vince Young nearly flattened me on his way to history, I thought it was one of the worst.”

The reasoning behind Plaschke’s logic?

It’s simple: USC beat itself by leaving the door open for Texas one too many times.

“The Trojans were a better team,” Plaschke said. “They should have been leading by double digits early but stumbled. They led by a dozen points late but couldn’t hold it. Their stars should have been carried off the field with a third consecutive national title but instead trudged off as victims of both hubris and human frailty.”

Among Plaschke’s points of emphasis were USC’s multiple failed fourth down attempts, largely due to questionable play-calling, ‘The Lateral’ from Heisman-winning running back Reggie Bush, and a controversial late second quarter Vince Young lateral that gave Texas a 9-7.

While such complaints are rooted within reason, they won’t change the historical significance and importance of that Jan. 4 night in Pasadena. Despite USC’s self-inflicted wounds, Young and the Longhorns connected on more than a few haymakers of their own in what became arguably the greatest star-studded, 60-minute slugfest in college football history.

A select few may not agree, but that won’t alter the general consensus that the 2006 Rose Bowl National Championship between Texas and USC was one of, if not the greatest college football game ever played.

Columnists look back on, and forward to, Longhorns-Trojans matchup