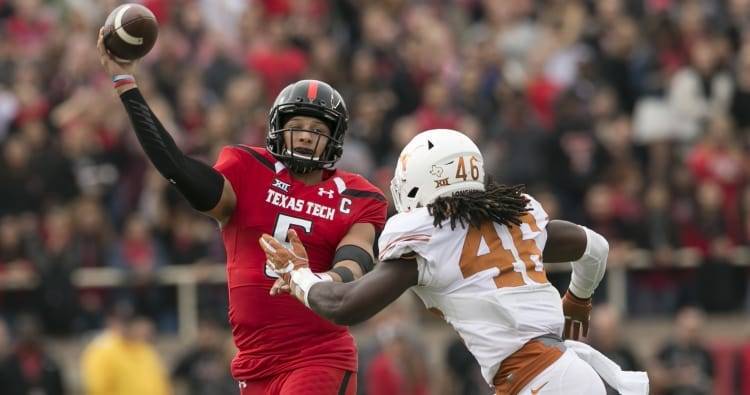 The latest notable number is 78.

Seventy-eight is the number worn by Denzel Okafor, a 310-pound sophomore who may start at right tackle on Saturday. Texas covered 78 yards on its fastest scoring drive this season, a six-play possession against Maryland that lasted 53 seconds. Texas totaled 78 tackles in its 17-13 loss to USC in 1967, and UT athletic director Mike Perrin assisted on six of those stops.

Seventy-eight also accounts for the number of passes completed last season against Texas by quarterbacks taken in the 2017 NFL draft.

USC quarterback Sam Darnold, a redshirt sophomore, is already being projected by some as the top pick in the 2018 draft. The 6-4, 220-pound Heisman Trophy contender has completed 74.6 percent of his passes and has thrown for 605 yards and four touchdowns.

Texas linebacker Naashon Hughes diagnosed Darnold as “one of the better quarterbacks in the nation.” Nickel back P.J. Locke III said the message to the Longhorns this week has been “you can’t play it the same way like you play other quarterbacks because he can make every single throw.” The four interceptions thrown over Darnold’s first two games? Not the statistic worth focusing on, said cornerback Holton Hill.

Texas coach Tom Herman recruited Darnold while he was the offensive coordinator at Ohio State. On Monday, he praised Darnold’s ability to make different kinds of throws and on his elusiveness. He also likened preparing for the fourth-ranked Trojans to a scene from the movie “Armageddon” where actor Owen Wilson quips that all Billy Bob Thornton’s character needed to say during a NASA debriefing was “Scariest environment imaginable.”

While the Longhorns were complementary of Darnold — Texas ranked 105th against the pass last year — it’s hard to imagine that the fear factor will be in play. Darnold, in fact, is one of many NFL-ready quarterbacks that this defense has faced over the past few years.

Texas went 2-1 in those games against future NFL quarterbacks last season. The Longhorns knocked off Notre Dame in overtime and recorded a 45-37 win over Texas Tech. Webb, however, delivered a 50-43 blow to a UT team that was ranked 11th at the time. In those games, the quarterbacks got their statistics:

Kizer completed 15 of 24 passes for 215 yards and five touchdowns. He also rushed for a score.

Webb completed 27 of 40 passes for 396 yards and four touchdowns. He also rushed for a score.

Mahomes completed 36 of his 59 passes for 367 yards and three touchdowns.

“We’ve seen so many in the past,” Hughes said. “Just because we’ve seen that style and we’re an older team on defense now, we’re not really too intimated from the quarterback standpoint. We think he’s a great quarterback as well, though.”

Darnold isn’t the first NFL prospect on UT’s scouting report. He also won’t be the last since Oklahoma’s Baker Mayfield and Oklahoma State’s Mason Rudolph await on the schedule. Hill said the Longhorns will need to prepare for each quarterback on its schedule the same way.

“You never want to underestimate somebody,” Hill said. “Right when you do that, they pop out. We take every opponent as if they’re a top-five team, top-ten team. (We) take every play as if it’s fourth-and-one.”