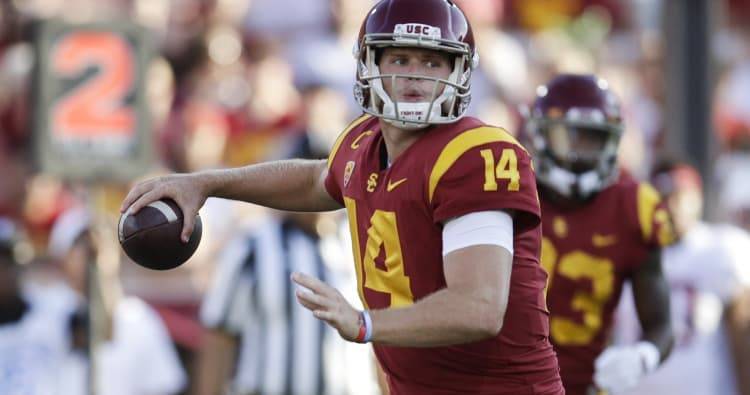 We’re interviewing the beat writer of Texas’ opponent each week this season. This week, it’s Zach Helfand (@zhelfand) of the Los Angeles Times offering his insight on the USC Trojans.

1. Through the first two games, has USC looked the part of a championship contender?

If you’d have asked through one game, I’d have said absolutely not. Two? Yes.

I’d been uncertain whether I consider the Trojans a playoff team, but the win over Stanford proved they are. The offense is scary with the run and the pass and the defense is just good enough for now to get the job done, and I expect it should improve.

2. Sam Darnold is completing 74.6 percent of his passes but also has been intercepted four times. Is there any reason for concern?

Not really. His first game was a bad game for him, but both interceptions were on balls that were tipped off a receiver’s hands. If the bad play continues into the second game, there would have been some concern, but it didn’t. He played an excellent game with two bad decisions, which I expect him to clean up.

3. What has been a strength and a weakness of the Trojans’ defense?

My two answers are going to contradict, but here it goes. USC’s strength is a linebacking corps that has three All-Pac 12 or All-American candidates in Cameron Smith, Uchenna Nwosu and Porter Gustin. Its weakness has been its run defense, which tightened in the second half against Stanford (25 rushing yards allowed) but looked very vulnerable against Western Michigan and early on against Stanford.

4. Texas fans still talk about the 2005 championship game. Is that game much of a topic of conversation in Los Angeles?

Yes, reluctantly for a lot of folks. We have been running a week-long series on the game, and people are eager to read about the people involved, less eager to rehash the game. But there are a number of players on the team, including Darnold and receiver Deontay Burnett, for whom the game was one of the defining memories of their USC fandom.

5. Name one USC player that Texas fans aren’t talking about — but should be.

Hard to say, since the only Texas fan I speak to often is the editor of our sports section. Are Texas fans talking about freshman running back Stephen Carr? He ran for 119 yards on 11 carries against Stanford. They should definitely talk about him.

6. For those Longhorns fans making the trip, do you have any Los Angeles restaurant recommendations?

There are so, so many options, but I’ll give my favorite restaurant in the city. It’s actually not even a restaurant, but a food truck: Guerilla Tacos, which serves the best and most interesting food in the city but on the street and for cheap. It’s in the Arts District on Fridays, Beverly Grove on Saturdays and in my neck of the woods, in Venice, on Sundays. Pro tip: Jonathan Gold, our food critic and also the finest food critic in the world, won’t ever lead you wrong. So if you’re out of food ideas, just Google him.

The post Texas vs. USC: A Q&A with a Trojans beat writer appeared first on Hook ‘Em.