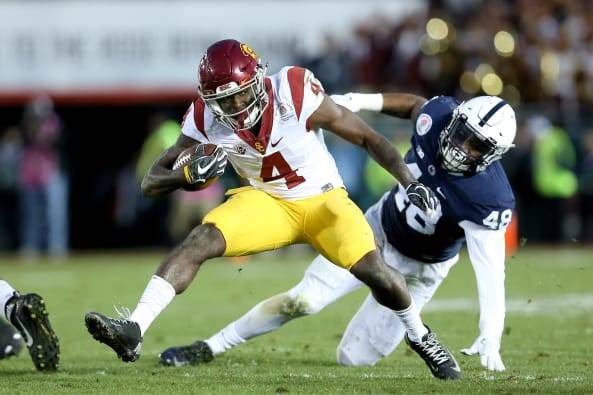 Texas and USC kick off at 7:30 p.m. Central at the Los Angeles Memorial Coliseum. It’s the first time these two college football bluebloods have met since the 2005 BCS national championship game, which continues to be talked about 11 years later and either does or doesn’t even count, depending on which side of the fence you’re on.

It’s a beautiful day in LA and it’s supposed to be a beautiful evening — sunny and 72 at kickoff.

Advancing the game: Brian Davis’ game advance looked at, 11 years after the BCS national championship game, how USC has managed to make it back into college football’s elite, but Texas? Not so much. How did the Trojans do it? Danny Davis looked at five key Longhorns-Trojans matchups to watch and four questions facing the Horns. Cedric Golden wrote about the level of NFL talent we’ll see on the field tonight compared to what we saw on Jan. 4, 2006 and Kirk Bohls wondered how things would have been different if the Trojans, not the Longorns, won it all in 2005. Brian’s weekly beat column examined the impact a win and a loss would make on the season and program and also looked at the two teams’ running backs — Texas’ Chris Warren III vs. USC’s Ronald Jones II.

The Dallas Morning News wrote on Tom Herman’s giant killer reputation forged from his 6-0 run vs. Top 25 teams at Houston. Lots of good stuff from the Los Angeles Times, including a look at how the two teams match up from their side of the game; an X’s and O’s piece on why USC will rely on the run, not the pass, against Texas; a Bill Plaschke column on why that 2005 national championship game was one of the worst, not one of the best, games ever played; a story on why non-conference matchups like Texas-USC will become rarer and rarer in the CFP era; a look at the Trojans’ other running back, freshman Stephen Carr; and a compelling read on LenDale White’s life after fourth-and-2. And the Los Angeles Daily News wrote on Deontay Burnett’s ascension to be the Trojans’ No. 1 wide receiver.

Both the Statesman and the Times run weekly Texas and USC mail bags. Here’s ours and here’s theirs. Interesting to get the viewpoints of both fan bases of this matchup. Texas’ was struggling with how much truly could be taken from the lopsided win over San Jose State while USC’s is worried that this is a trap game.

This will be only the sixth time these schools have played each other. USC leads the all-time series, 4-1:

Texas bounced back from its Week 1 loss with a 56-0 shutout of San Jose. Freshman quarterback Sam Ehlinger got his first career start in place of the injured Shane Buechele, and Chris Warren III rushed for 166 yards and two touchdowns.

1. Is Sam Darnold perfect? No. The Heisman front-runner, yes. The probable No. 1 pick in the 2018 draft? Yes. But he’s also already thrown four interceptions in the first two games. Attention, Holton Hill.

2. How will Texas utilize its quarterbacks? Buechele has practiced this week and he made the trip to LA, so we’re expecting he’ll start. But even if he does, look for Ehlinger to get some snaps as well as Jerrod Heard; Ehlinger and Heard provide wrinkles that Buechele doesn’t.

3. Who’ll win the Battle of the Roman Numerals — appropriately being played at the Coliseum? Chris Warren III and Ronald Jones II are keys to their respective offenses, a pair of Texans who are coming off big performances last week.

Don’t be surprised, though, if it’s Kyle Hicks, not Warren, who starts tonight. Offensive coordinator Tim Beck utilized the backs for Buechele to hit out of the backfield in the opener against Maryland. Hicks is the better receiver and he got the start against the Terrapins; Warren, the stronger runner, started last week when Ehlinger started.

5. After two games, we’re still trying to figure out who the Longhorns are. There was the first-game sleepwalk against Maryland, a middling Big Ten program, followed by a 56-0 domination of overwhelmed San Jose State. The fourth-ranked Trojans, however, will serve as a true measurement as Texas heads into Big 12 play.

What can a non-conference game with San Jose State do for your national stats? Consider this:

Scoring defense: From 121st to tied for 72nd. That’s a one-week leapfrog of nearly 50 schools.

It wasn’t all cakes and Kool-Aid. Texas dropped nationally in passing (from 14th to 29th).

Conversely, that whole national stat rankings can work the other way. San Jose State and USC may play only 343 miles away from each other, but their teams are far, far apart. Consider this:

Texans on the Trojans roster:

We’ve got four writers in LA — beat writers Brian Davis and Danny Davis along with columnists Kirk Bohls and Cedric Golden. We asked each one of them for their thoughts on the game this week:

“You’d be hard pressed to find any Texas fan who gives their boys a shot against USC. That’s why in my estimation the final score isn’t all that important. Obviously, a Texas win would be a game-changer. But right now, I’m far more interested in gauging how coach Tom Herman prepares his team for a monumental challenge. Does Texas come out and fight like we saw at Cal last season? Or will these players come out flat like we saw at TCU in 2015? That game was over by the end of the first quarter. This is all about determining Texas’ intensity level. Play well here, and the rest of the season looks much brighter.”

“Jerrod Heard is listed at three different positions on this week’s depth chart — third-string quarterback, still an option to return punts and starting at Z receiver. Unless Texas is going to let him throw, I’d suggest that Heard focus on his hands. The Wild Heard (or whatever you want to call it) had some success last week against San Jose State. But that’s San Jose State. If defensive coordinators aren’t worried about an aerial attack whenever No. 13 jogs onto the field, then that package will become as effective as the 18-Wheeler was toward the end of last year.”

Kirk Bohls: This will tell us a lot about Texas

“Texas isn’t saying who’ll start at quarterback. May not even matter because this USC team is loaded, led by future high NFL draft pick Sam Darnold. Regardless, this should serve as a terrific measuring stick for Tom Herman’s Longhorns. Are they more like the team that gave up 51 points to unranked Maryland at home or the one that shut out lowly San Jose State last week? Somewhere in between, but a potential blowout loss like 48-20 could signal a treacherous beginning to a tough first-half schedule for Texas.”

Cedric Golden: Set a tone for the Big 12 schedule

“Moral victories don’t register in big-time college football, but the Longhorns can’t really afford to come out West and get their hats handed to them in a nationally televised game with historic implications and storylines. The people out here in Cali remember when Vince Young broke their hearts in 2006 and this is a chance to embarrass Texas. I’ve never seen a more vulnerable team coming off a 56-0 win than these Horns. How Texas plays Saturday will have a lot to do with how Texas performs come Big 12 season. The Horns won’t beat USC but they need to avoid getting wiped out.”

Our college staff pick-em line was unanimous: 7-0 for USC.

The Eyes of Texas: Three Trojans the Horns will be watching