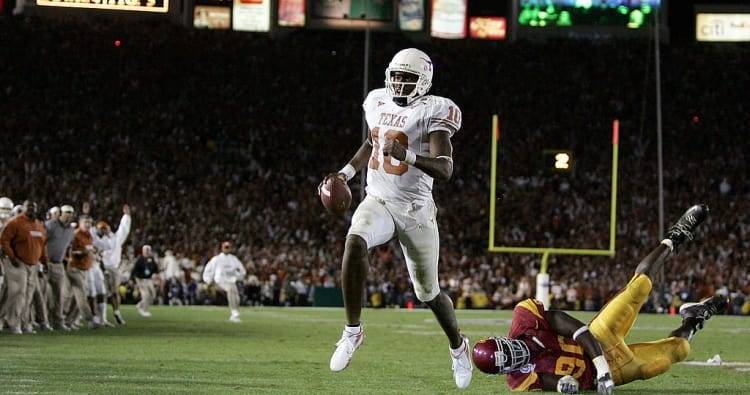 With Texas and USC squaring off for the first time since the 2006 Rose Bowl, ESPN’s Tom Rinaldi took a look on College GameDay at how that game impacted the legacy of Vince Young.

One of the six “immortals” in Texas history with a retired jersey, as Tom Herman called him, Young put on a show that night in Pasadena. Three touchdowns, 467 yards of total offense — Texas fans know the stat lines by now.

But Young pulled back the curtain some in the GameDay package, giving more info on the legendary performance.

“I never had too much doubt,” he said, even when the Longhorns trailed by 12 in the 4th quarter.

In fact, then-head coach Mack Brown said Young knew he’d be able to pull Texas back. When USC’s LenDale White was stopped on 4th down with 2:09 to play, Young reassured his coach on the sideline.

“When we we made that stop, Vince came to me and said, ‘Coach we’re going to win the national championship. They can’t stop us,’” Brown recalled.

Young’s pro career didn’t last that long, and he’s had personal difficulties since then. But he says he’s more mature now, and is starting to realize how much the Rose Bowl meant to him and Texas fans everywhere.

“That moment is starting to hit me more now,” he said. “It wasn’t just a football game, it actually put a lot of hope in a lot of people’s lives.”

Texas and USC are very different teams now. The matchup tonight isn’t a direct descendant of that Rose Bowl, but that doesn’t mean Trojans and Longhorns alike aren’t thinking about that game.

And it doesn’t mean Vince Young’s magical performance has lost any of its luster.

The Eyes of Texas: Three Trojans the Horns will be watching

With ‘the rematch’ looming, remembering the 2006 Texas-USC Rose Bowl classic