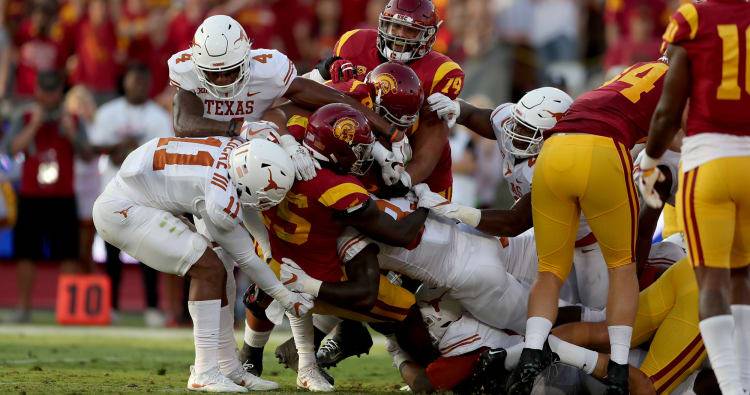 That score is correct. The Longhorns, who are 16-point underdogs, are absolutely in this game thanks to a defense that has looked like it turned back the clock to Jan. 4, 2006.

DeShon Elliott plucked a tipped pass inches from the ground and returned it 38 yards for a touchdown with 19 seconds left in the half. It was indicative of what the defense has done all night: Keep Texas in this game.

The Trojans, though, struck on the very final play of the half — 56-yard touchdown pass to Ronald Jones II, who outmaneuvered the Texas secondary for a weaving catch-and-run score that, well, looked like it was Reggie Bush out there.

Tom Herman, who’s 6-0 vs. Top 25 teams and 3-0 vs. Top 10s, has Texas playing above expectations. Freshman Sam Ehlinger got the start for the second straight week, and he’s been shaky. He’s thrown an interception and lost a fumble. He’s taken a couple of shots downfield, both of which appeared to be pass interference calls that, well, weren’t called.

The Trojans, frustrated for most of the night, finally scored late in the half on Sam Darnold’s 15-yard pass to Deontay Burnett in the back of the end zone with 2:06 left in the half.

But then Elliott tied it up with his pick-six. But then USC answered with Jones’ score.

After most of this half was a 0-0 affair, three touchdowns were scored in the final 2:40.

Texas passed up the chance to try a 35-yard field goal on their first drive by going for it on fourth-and-3 at USC’s 18. Ehlinger was stopped on the keeper.

Still, it’s been a big night for the defense. These defenders came to play:

Connor Williams went down on the first play of the second quarter. Tristan Nickelson is now playing at left tackle. We haven’t heard anything about Williams’ injury.

As good as the defense has looked, the offense has struggled. The running game hasn’t been established. Ehlinger has been pressured throughout and has made a couple of mistakes. Those two no-calls on deep throws haven’t helped.

Breaking down the Longhorns’ four drives of the first quarter: Downs, interception, punt and fumble.

What if Tom Herman had given Joshua Rowland a shot from 35 yards out on Texas’ first drive? Yes, he’s missed from 42, 43 and 44 yards and had one of those blocked and returned for a touchdown. But you’re on the road playing the fourth-ranked team in the country and you’re playing your freshman quarterback in his second career start. Ehlinger was stuffed on fourth-and-3. That 3-0 lead would have felt good even a quarter later with the defense pitching a shutout and frustrating the Trojans. And it might have been a 14-10 game at the break.

What did that downfield ref see on Ehlinger’s third-down shot to Collin Johnson early in the second quarter? You know, the one where 8 had Johnson’s arm locked. Because we know what he didn’t see. Same goes with Ehlinger’s shot to Lorenzo Joe later in the quarter, when the defender had his arm wrapped around Joe’s waist.

Why not see what Buechele can do? He practiced this week. Could be that Herman and Tim Beck thought Ehlinger’s ability to improvise and run was the best shot against USC. That also could be why we saw Jerrod Heard a couple of times. Or it could be that they wanted to protect Buechele’s shoulder unless playing him was absolutely necessary. Let’s see what we get in the second half.

The post It’s halftime, and defense is keeping Texas in a 14-7 showdown with USC appeared first on Hook ‘Em.